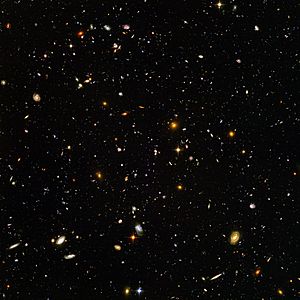 This high-resolution image of the HUDF includes galaxies of various ages, sizes, shapes, and colors. The smallest, reddest galaxies, about 100, are some of the farthest galaxies to have been imaged by Hubble, existing when the universe was just 800 million years old. 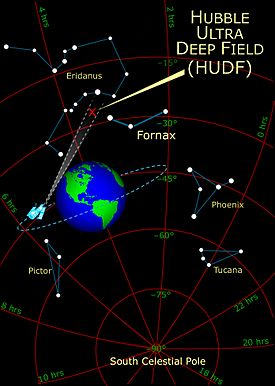 Location of the Hubble Ultra Deep Field in the night sky.

The Hubble Ultra Deep Field, or HUDF, is an image of a small part of space in the constellation Fornax.

It took more than 3 months to capture this image, from September 24, 2003 through January 16, 2004. It is the furthest image of the universe ever taken by humans. In it we see the universe as it was 13 billion years ago, when it was about 800 million years old.

The HUDF contains an about 10,000 galaxies. The patch of sky where the galaxies are was chosen because it has few bright stars in the near-field. Although most of the targets visible in the Hubble image can also be seen at infrared wavelengths by ground-based telescopes, Hubble is the only instrument which can make observations of these distant targets at visible wavelengths.

In total, the image required 800 exposures taken over the course of 400 Hubble orbits around Earth. The total amount of exposure time was 11.3 days for the ACS and 4.5 days for the NICMOS.

All content from Kiddle encyclopedia articles (including the article images and facts) can be freely used under Attribution-ShareAlike license, unless stated otherwise. Cite this article:
Hubble Ultra Deep Field Facts for Kids. Kiddle Encyclopedia.