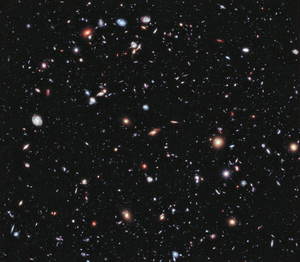 The Hubble eXtreme Deep Field (XDF) is an image of a small part of space in the center of the Hubble Ultra Deep Field. It is in the direction of the constellation Fornax. The image shows the deepest optical view into space.

The XDF image was released on September 25, 2012. The image combined 10 years of images. It shows galaxies that are over 13.2 billion years old. The exposure time was two million seconds, or about 23 days. The least bright galaxies are one ten-billionth the brightness of what the human eye can see. Many of the smaller galaxies are very young galaxies. Some of there became the major galaxies, like the Milky Way and other galaxies in our galactic neighborhood.

The Hubble eXtreme Deep Field adds another 5,500 galaxies to Hubble's 2003 and 2004 view into a very small part of the farthest universe.

All content from Kiddle encyclopedia articles (including the article images and facts) can be freely used under Attribution-ShareAlike license, unless stated otherwise. Cite this article:
Hubble Extreme Deep Field Facts for Kids. Kiddle Encyclopedia.