Mary in Islam facts for kids

Mary (Arabic: مريم‎code: ar is deprecated ; Marīam), the mother of Isa (عيسى;) is venerated in Islam. Her parents are mentioned as Imran (عمران) and Hannah (حنا) and her sibling is Harun (هارون). She is one of the most important and righteous women in Islam. She is mentioned in the Quran more than in the New Testament (Bible). She is the only woman mentioned by name in the Quran. Many Muslim women look up to her as an example. According to the Quran, Allah (God) chose Mary above all women of all nations. The Quran states:

Mary in the Quran

Mary is mentioned in the Quran frequently. Her life narrative occurs in the earliest chapters. The nineteenth chapter is named after her. The chapter is called Maryam.

In the Quran, Mary is believed to be a daughter of (Imran) Amram and (Hanna) Anne. While some confuse the parents of Moses. Aaron and their Sister Miriam to be the same of the Virgin Mary, this is not correct. While Moses and Harun did have a sister named Miriam (Mary,) and while their father was also named Amram (Imran), this does not mean that the parents of both Prophet Moses and The Virgin Mary were the same. And God knows best.

The birth of Mary is mentioned in the Quran in various chapters. Her father Imran (Arabic: يواكيم‎code: ar is deprecated ) is also mentioned in the Quran. The Quran says that and Imran ne were old and had no children for years. One day Anne saw a bird feeding her young. Seeing this made Anne want a child for herself. She prayed to Allah for a child. She promised that if her prayers were answered, her child's life would be dedicated to the service of Allah. Anne also prayed for her child to be protected from the "touch" of Satan (إبليس; Iblīs).

The Quran says that Mary grew up in the temple of prayer and had a special place of her own in the temple. The Quran states that there was a cast of the dice to decide who would become the guardian of Mary. The person chosen through this process was the Prophet Zechariah. Often, when Zechariah would visit the chamber of Mary, he would find her with quantities of food. He always asked her where she had obtained the food, and Mary would always answer: "Allah provides to whom he will." As a prophet, Zechariah would not have questioned this response because he would have known that Allah is the provider of all things in life and, indeed, of life itself.

The birth of Isa and the Annunciation of Mary are very important to Islam. They are considered to be some of the most important miracles of Allah. The first mention of the Annunciation following the Birth of Isa is in sura 19 (Maryam) ayah 20. The Quran tells us that the Angel Gabriel (Arabic: الروح القدس‎code: ar is deprecated , al-Ruḥ al-Quds, Jibra'il) came to the Virgin Mary and told her that she would soon be pregnant with a holy child. The Virgin Mary asked how it would be possible for her to become pregnant when no man had touched her. The Angel Gabriel replied that nothing is impossible for Allah, and that the Birth of Jesus would be a sign for all mankind. The birth is mentioned later at sura 66 (At-Tahrim) ayah 12, where the Quran says that the Virgin Mary remained pure while Allah created Isa inside her womb. 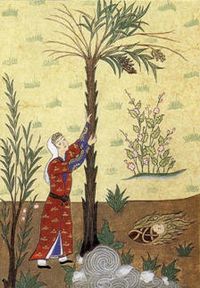 Virgin Mary nurtured by a palm tree, as described in the Quran.

The Quran speaks of the virgin birth of Isa many times. The Quran also states that Jesus was created when Allah breathed on Mary while her body was chaste. 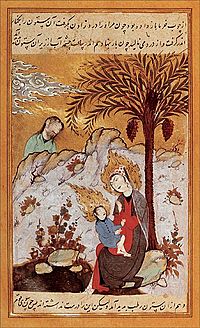 Mary with Jesus near the Palm tree where she gave birth.

The Quran's narrative of the birth of Isa is different from that of Jesus as found in the New Testament. The Quran says that Mary was suffering childbirth pains, when she saw a nearby palm tree and held on to it. While she was holding on to the tree, she heard a voice that seemed to come from the earth beneath the tree. The voice said, "Grieve not! Thy Lord hath provided a rivulet beneath thy feet. Shake the trunk of the palm-tree towards thyself and It will drop its fresh ripe dates upon thee." Mary then promised not to speak with any man that day.

Later, after Isa's birth, Mary brought him to the temple. All of the men in the temple mocked her, except Zechariah, who believed in the virgin birth. The Israelites demanded to know how she could possibly have had a baby without a man, whereupon the Virgin Mary responded by pointing to Jesus who then spoke his first prophecy.

"O Mary! Bow down in prayer with those men, who bow down." This is believed to be the command to Mary by the Angels.

Mary is believed to have been buried in a tomb at the foot of the Mount of Olives in the Kidron Valley. This tomb is known today as the Tomb of the Virgin Mary.

All content from Kiddle encyclopedia articles (including the article images and facts) can be freely used under Attribution-ShareAlike license, unless stated otherwise. Cite this article:
Mary in Islam Facts for Kids. Kiddle Encyclopedia.