Ronald "Carl" Giles OBE (29 September 1916 – 27 August 1995), often referred to simply as Giles, was a cartoonist best known for his work for the British newspaper the Daily Express. 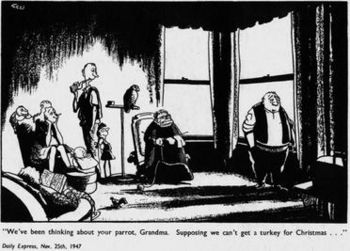 Giles's cartoons appeared in the Daily Express newspaper and used his cartoon family to illustrate and comment on topics of the day. 'Grandma' seated with knitting appeared in November 1947.

His cartoon style was a single topical highly detailed panel, usually with a great deal more going on than the single joke. Certain recurring characters achieved a great deal of popularity, particularly the extended Giles family, which first appeared in a published cartoon on 5 August 1945 and featured prominently in the strip. Of these, the most remembered is the enigmatic matriarch of the family, known simply as Grandma.

Another recurring favourite was Chalkie, the tyrannical school teacher who Giles claimed was modelled on one of his childhood teachers, and Larry, the mop-haired child from next door, often seen with a camera.

All content from Kiddle encyclopedia articles (including the article images and facts) can be freely used under Attribution-ShareAlike license, unless stated otherwise. Cite this article:
Carl Giles Facts for Kids. Kiddle Encyclopedia.