Haverhill ( hay-VƏR-hil HAYV-ril) is a market town and civil parish in the county of Suffolk, England, next to the borders of Essex and Cambridgeshire. It lies about 14 miles (23 km) southeast of Cambridge, southwest of Bury St Edmunds, north west of Braintree and west of Colchester.

The town centre lies at the base of a gentle dip in the chalk hills of the Newmarket Ridge; running through the town is the Stour Brook, which goes on to join the River Stour just outside the town. Rapid expansion of the town over the last two decades means that the western edge of Haverhill now includes the hamlet of Hanchet End. The surrounding countryside largely consists of arable land.

Haverhill dates back to at least Saxon times, and the town's market is recorded in the Domesday book (1086). Whilst most of its historical buildings were lost to the great fire on 14 June 1667, one notable Tudor-era house remains (reportedly given to Anne of Cleves as part of her divorce from Henry VIII and thus titled Anne of Cleves House) as well as many interesting Victorian buildings.

Following a planning review in 1956, Haverhill was targeted for expansion. This was primarily to resettle communities from London which had been devastated during World War II. As part of this plan, new housing settlements and new factories were built. A later review in 1962 planned for a threefold increase in population from the then population of 5,446.

This influx of people changed many aspects of life in Haverhill. One noticeable change is that the local Suffolk accent (still spoken by the town's older residents) has largely been replaced by a London/South-east England accent characterised as Estuary English. The expansion was not without friction. Residents who moved to the newly developed areas complained about the housing density and lack of amenities in a 1968 Man Alive documentary.

Nowadays, Haverhill is predominantly a modern and young town. The relatively small town centre is surrounded by many large housing developments, completed at various periods between the 1950s and the present. 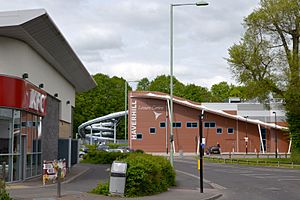 Haverhill has two Non-League football clubs, Haverhill Rovers F.C. and Haverhill Borough F.C., who both play in the Eastern Counties Football League. The two clubs share the New Croft ground. The town also has a tennis club which is affiliated with the Lawn Tennis Association. Other sporting clubs in the town include a cricket club, a rugby club, and an angling club. Since 2013 Haverhill has also been home to Suffolk's only baseball team, Haverhill Blackjacks, who play in the British Baseball Federation Single-A South league, and who also play their home games at the New Croft.

There are various sporting activities available in Haverhill, including a leisure centre (with swimming pool, gym and a children's soft play area, Kid City), an 18-hole golf course, a dance school, and a skate park.

Haverhill Arts Centre is housed within the grade II listed town hall, and features a cinema as well as hosting live music, drama, dance and comedy. A 5-screen multiplex cinema complex was opened in October 2008. From 2007 to 2013 the town was home to The Centre for Computing History, a computer museum established to tell the story of the Information Age. 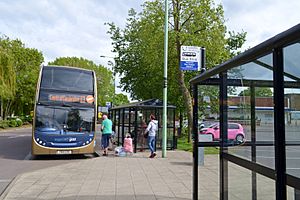 There was once a railway station on the property of Tesco.

The A1307 road is the only major road that connects Haverhill to Cambridge and the A11 and the M11 motorway. This route experiences congestion with commuter traffic most mornings and evenings. The A1307 is classified as a very high risk of casualty route. A proposal exists to develop the route whereby a new dual carriage way would be built from Haverhill to Cambridge, keeping the original road open as a feeder road and local bus stop route. Local bus services on this route are provided by Stagecoach: routes 13, 13A, 13B and X13 run approximately every 30 min during the day, every 60 min evenings and Sundays. The bus station in Haverhill also provides local services to some of the surrounding towns and villages.

The town has no railway station and is one of the largest towns in England and the largest town in Suffolk without one. It once had two railway stations and two interconnected railways. The Stour Valley Railway ran from Cambridge to Sudbury and beyond via Haverhill North whilst the Colne Valley and Halstead Railway ran from Haverhill South to Marks Tey via Castle Hedingham and Halstead.

For the most part, Haverhill North was used as the passenger train terminus for both the Stour Valley and Colne Valley railways to allow interchange between the two. Both stations are now demolished, but many bridges, cuttings and embankments are still visible in Haverhill and beyond.

'Rail Haverhill' (formerly Cambridge to Sudbury Rail Renewal Association) is leading a campaign to re-open the railway between Haverhill and Cambridge. The campaign is supported by the town's MP, Matthew Hancock, and a feasibility study is currently underway.

For national and international flights, Haverhill is close to London Stansted Airport, which lies approximately 21 miles (30 km) to the south. The much smaller Cambridge City Airport also serves some domestic flights.

In 2000-1 two thousand inhabitants of Haverhill were photographed and morphed into a single image by the artist Chris Dorley-Brown. The resulting image was displayed in the National Portrait Gallery (London). This was the biggest photographic morphing project of its kind.

In November 2004, Haverhill made a claim for a world first, becoming the only known town to feature a laser-lit sculpture on a roundabout.

Haverhill is twinned with

The following photographs were taken in May 2015.

Haverhill's economy is dominated by industry, and a large industrial area on the southern side of the town is home to a large number of manufacturing companies. Scientific firms including Sanofi and Sigma-Aldrich have plants in the town, as do International Flavors & Fragrances, and some waste processing, transport and construction firms. A business park has also been built on the industrial estate, alongside the bypass.

Nathaniel Ward, the author of the first constitution in North America, was born in Haverhill in 1578. A local school is named after Nathaniel's brother Samuel. Pop musician Steve Rinaldi of the bands Rinaldi Sings and the Moment, who featured a map of the town on the cover of their first single, "In This Town" (1984), is originally from Haverhill.

All content from Kiddle encyclopedia articles (including the article images and facts) can be freely used under Attribution-ShareAlike license, unless stated otherwise. Cite this article:
Haverhill, Suffolk Facts for Kids. Kiddle Encyclopedia.