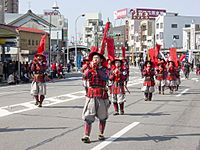 Men dressed like ashigaru soldiers in a local parade.

Ashigaru is a type of Japanese soldier that began during the Heian Period (794-1185). Their origin is serving as bodyguards to government officials during this period. They became more active over hundreds of years and ended up serving as foot-soldiers for samurai and shogun. Ashigaru became masterless warriors after the beginning of the Edo Period (1603-1868). After the Edo Period, many became police.

Ashigaru are noted for using surprise attacks and group tactics. They wore metal armor, a gauntlet, and a Japanese half-length coat. The armor also had leather and Japanese rice paper. Their weapon was a sword, spear, gun, or bow. Ashigaru also carried a water bottle, tissue paper, and rice.

In the Ōnin War (1467-1477), the ashigaru robbed and looted Kyoto. This gave ashigaru a reputation as bad troops.

All content from Kiddle encyclopedia articles (including the article images and facts) can be freely used under Attribution-ShareAlike license, unless stated otherwise. Cite this article:
Ashigaru Facts for Kids. Kiddle Encyclopedia.