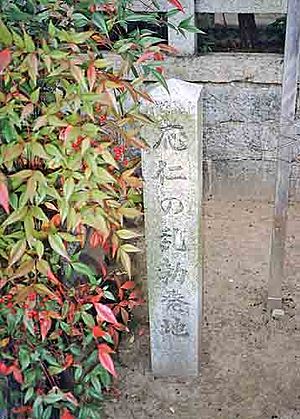 Marker where the Ōnin War began

Hosokawa Katsumoto and Yamana Sōzen had a conflict that grew into a war throughout the country. The Ashikaga shogunate and some daimyo in many regions of Japan fought in this war.

The conflict was the beginning of a very long struggle to dominate all of Japan.

All content from Kiddle encyclopedia articles (including the article images and facts) can be freely used under Attribution-ShareAlike license, unless stated otherwise. Cite this article:
Ōnin War Facts for Kids. Kiddle Encyclopedia.