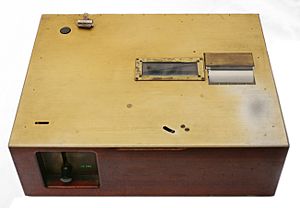 Teaching machines were originally mechanical devices. They presented educational materials and taught students. They were first invented by Sidney L. Pressey. His machine originally administered multiple-choice questions. When the machine was set so it moved on only when the student got the right answer, tests showed that learning had taken place. Much later, Norman Crowder developed the Pressey idea much further.

B.F. Skinner was responsible for a different type of machine which used his ideas on how learning should be directed with positive reinforcement.

All content from Kiddle encyclopedia articles (including the article images and facts) can be freely used under Attribution-ShareAlike license, unless stated otherwise. Cite this article:
Teaching machine Facts for Kids. Kiddle Encyclopedia.