Kurt Friedrich Gödel (April 28, 1906 – January 14, 1978) was an Austro-Hungarian-born Austrian, and later American, logician, mathematician, and philosopher. Considered along with Aristotle and Gottlob Frege to be one of the most significant logicians in history, Gödel had an immense effect upon scientific and philosophical thinking in the 20th century, a time when others such as Bertrand Russell, Alfred North Whitehead, and David Hilbert were analyzing the use of logic and set theory to understand the foundations of mathematics pioneered by Georg Cantor.

Gödel published his two incompleteness theorems in 1931 when he was 25 years old, one year after finishing his doctorate at the University of Vienna.

To prove this theorem, Gödel developed a technique now known as Gödel numbering, which codes formal expressions as natural numbers. 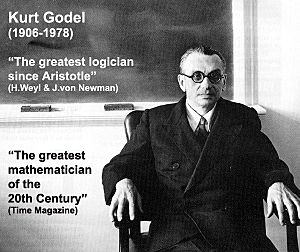 Later in his life, Gödel suffered periods of mental instability and illness. He had an obsessive fear of being poisoned; he would eat only food that his wife, Adele, prepared for him.

Late in 1977, she was hospitalized for six months and could no longer prepare her husband's food. In her absence, he refused to eat, eventually starving to death. He weighed 29 kilograms (65 lb) when he died.

His death certificate reported that he died of "malnutrition and inanition caused by personality disturbance" in Princeton Hospital on January 14, 1978. He was buried in Princeton Cemetery. Adele's death followed in 1981.

The Kurt Gödel Society, founded in 1987, was named in his honor. It is an international organization for the promotion of research in the areas of logic, philosophy, and the history of mathematics. The University of Vienna hosts the Kurt Gödel Research Center for Mathematical Logic. The Association for Symbolic Logic has invited an annual Kurt Gödel lecturer each year since 1990.

All content from Kiddle encyclopedia articles (including the article images and facts) can be freely used under Attribution-ShareAlike license, unless stated otherwise. Cite this article:
Kurt Gödel Facts for Kids. Kiddle Encyclopedia.