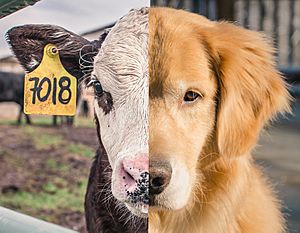 While both are animals, cows are largely treated as livestock and killed to be eaten, while dogs are usually given special status and treatment as pets. Both are sentient beings who experience pleasure and suffering.

Speciesism or specism is a form of discrimination based on species membership. It involves treating members of one species as morally more important than members of other species even when their interests are equivalent. More precisely, speciesism is the failure to consider interests of equal strength to an equal extent because of the species of which the individuals have been classified as belonging to.

The term is often used by ethical vegans and animal rights advocates, who state that speciesism is a prejudice similar to racism or sexism, in that the treatment of individuals is predicated on group membership and morally irrelevant physical differences. It is thought that speciesism plays a role in inspiring or justifying cruelty in the forms of factory farming, the use of animals for entertainment such as in bullfighting and rodeos, the taking of animals' fur and skin, experimentation on animals, and the refusal to aid wild animals that suffer due to natural processes.

An example of a speciesist belief would be the following: Suppose that both a dog and a cow need their tails removed for medical reasons. Suppose someone believes that the dog and the cow have equivalent interests, but insists that the dog receive pain relief for the operation, yet is fine with the cow's tail being docked without pain relief, remarking, "it's just a cow." This belief is speciesist because it disregards her interest in not suffering intense pain due to her species membership.

It is possible to give more consideration to members of one species than to members of another species without being speciesist. For example, consider the belief that a typical human has an interest in voting but that a typical gorilla does not. This belief can involve starting with a premise that a certain feature of a being—such as being able to understand and participate in a political system in which one has a political representative—is relevant no matter the being's species. For someone holding this belief, a test for whether the belief is speciesist would be whether they would believe a gorilla who could understand and participate in a political system in which she had a political representative would have an interest in voting.

There are a few common speciesist thoughts.

All content from Kiddle encyclopedia articles (including the article images and facts) can be freely used under Attribution-ShareAlike license, unless stated otherwise. Cite this article:
Speciesism Facts for Kids. Kiddle Encyclopedia.