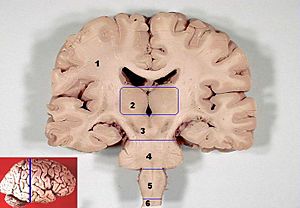 The midbrain, pons, and medulla oblongata are labelled on this section of the human brain.

The brainstem is the rear part of the brain. It has two sections: the hindbrain, which includes the pons, and the midbrain.

The hindbrain is the medulla oblongata, which is an extension of the spinal cord. It connects the other parts of the brain (the cerebrum and cerebellum) to the spinal cord. Its neurons are the control centre of bodily functions, such as breathing and blood pressure.

Functions of the brainstem

Conduction
All information going between the body and the cerebellum and the cerebrum must go through the brainstem.
Nerves
Cranial nerves 3–12 emerge from the brainstem. There are motor neurons in the brainstem that allow movement in the face, including speech and swallowing.
Integration
It is involved in cardiovascular system control, respiratory control, pain sensitivity control, alertness, awareness, and consciousness. Thus, brainstem damage is a serious and often life-threatening problem.

All content from Kiddle encyclopedia articles (including the article images and facts) can be freely used under Attribution-ShareAlike license, unless stated otherwise. Cite this article:
Brain stem Facts for Kids. Kiddle Encyclopedia.