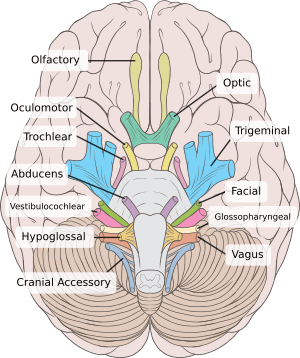 A cranial nerve is any nerve which is attached directly to the brain or brainstem. This is different from spinal nerves which are attached to segments of the spinal cord. Cranial nerves relay information more directly between the brain and body (mostly parts of the head and neck).

Each cranial nerve exists as a pair and is present on both sides of the central nervous system. All cranial nerves appear above the first vertebra in the neck (cervical vertebra).

In humans there are twelve cranial nerves pairs. They are numbered using Roman numerals I–XII based on their order from the front of the brain to the back, where the brainstem is. 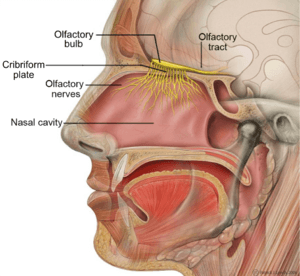 The olfactory nerve is the shortest cranial nerve. It is one of two cranial nerves that does not connect to the brain stem, the other being the optic nerve (CN 2).

The olfactory nerve is unique because it is the only cranial nerve that can regenerate parts of itself if it is damaged.

Damage to this path can cause anosmia, or loss of the ability to smell.

The optic nerve (CN II) transmits visual information from the retina to the brain.

The oculomotor nerve (CN III) controls most of the muscles related to the movement of the eye, including the eyelids and control of the pupil. The trochlear nerve (CN IV) and abducens nerve (CN VI) are each responsible for their own single eye muscles.

The trigeminal nerve (CN V) is called "trigeminal" because it is made of 3 parts. Together, all these parts are responsible for sensation in the face and larger facial movements such as biting and chewing.

The facial nerve (CN VII) controls the muscles of facial expression, and helps carry taste sensations from the back of the tongue and mouth.

The vestibulocochlear nerve (CN VIII) transmits sound and equilibrium (balance) information from the inner ear to the brain.

The glossopharyngeal nerve (CN IX) is a mixed nerve that carries a wide range of sensory and motor information.

Control of heart and digestion (X)

The vagus nerve (CN X) allows for parasympathetic control of the heart and digestive tract. It is the longest nerve of the autonomic nervous system in the human body.

The accessory nerve (CN XI) is a cranial nerve that controls the sternocleidomastoid and trapezius muscles.

The hypoglossal nerve (CN XII) is involved in controlling tongue movements required for speech and swallowing.

Routes out of the brain

After leaving the brain, the cranial nerves travel inside the skull. Some must leave this bony compartment to reach their destinations. Often the nerves pass through holes in the skull, called foramina. Other nerves pass through bony canals, longer pathways enclosed by bone. These foramina and canals may have more than one cranial nerve, and may also contain blood vessels.

All content from Kiddle encyclopedia articles (including the article images and facts) can be freely used under Attribution-ShareAlike license, unless stated otherwise. Cite this article:
Cranial nerve Facts for Kids. Kiddle Encyclopedia.