Kids Encyclopedia Facts
In this Chinese name, the family name is Peng.

Peng Liyuan (simplified Chinese: 彭丽媛; traditional Chinese: 彭麗媛; pinyin: Péng Lìyuán born 20 November 1962) is a Chinese contemporary folk singer who is the spouse of the President of the People's Republic of China. Peng Liyuan is married to the current General Secretary of the Chinese Communist Party and President Xi Jinping. Peng is referred to as the "Chinese First Lady" by Chinese media. During 2012 to 2017, Peng was the President of then People's Liberation Army Academy of Art, and from 2005 to 2010, served as Vice President of the All-China Youth Federation.

Peng gained popularity as a soprano singer from her regular appearances on the annual CCTV New Year's Gala, a widely viewed mainland Chinese television program that airs during the Chinese New Year. Peng has won many honors in singing competitions nationwide. Peng's most famous singles include "People from Our Village" (《父老乡亲》), "Zhumulangma" (Mount Everest; 《珠穆朗玛》) and "In the Field of Hope" (《在希望的田野上》). Peng also sang the theme songs of several popular TV series, such as The Water Margin (1998). She also starred in musical productions. In 1986, she received the Plum Blossom Award, China's highest theatrical award, for her lead role in The White Haired Girl.

Peng was a civilian member of China's People's Liberation Army, and held the civilian rank equivalent to Major General before she was appointed the Art Academy's dean, upon which she was given the formal rank. She is known within China for her fashion sense, credited to her personal couturier Ma Ke.

In 2014, Peng was listed as the 57th Most Powerful Woman in the World by Forbes. 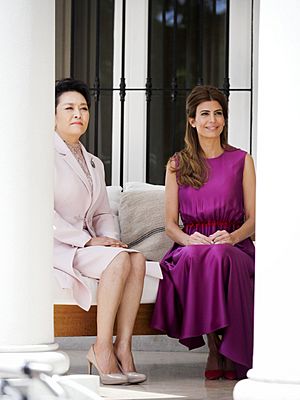 Peng Liyuan is a native of Yuncheng County, Shandong province. Peng joined the People's Liberation Army in 1980, when she was 18 years old, and began as an ordinary soldier. Because of her vocal talent, Peng later performed during frontline tours to boost troop morale during the Sino-Vietnamese border conflicts. Peng first performed nationally and came to fame during the earliest rendition of the CCTV New Year's Gala in 1982, when she performed On the Plains of Hope.

Peng has been married to Xi Jinping for over 30 years. Together they have a daughter named Xi Mingze (习明泽) born in 1992, nicknamed Xiao Muzi (小木子).

For the greater part of their relationship, Peng has enjoyed a very positive reputation within China, comparable to that of her politician husband. Since her husband became General Secretary of the Communist Party (de facto paramount leader) in November 2012, and Chinese President (de jure head of state) in March 2013, the American press refers to her as the First Lady of China.

Xi and Peng were introduced by friends as many Chinese couples were in the 1980s. Xi was reputedly academic during their courtship, inquiring about singing techniques. Xi was the son of famous Chinese revolutionary Xi Zhongxun, and Peng's family obviously accepted the relationship with ease, due to his attitude. After parental consent, the couple married on 1 September 1987 in Xiamen, Fujian. Four days later, Peng Liyuan returned to Beijing to appear in the National Art Festival, and then immediately departed for the United States and Canada to perform. Since that time, Xi and Peng have led largely separate lives, with Peng spending most of her time in Beijing, and her husband spending his time in Fujian and later in Zhejiang.

Peng is actively involved in politics, and is a member of the 11th National Committee of the Chinese People's Political Consultative Conference. Peng is a WHO Goodwill Ambassador for tuberculosis and HIV/AIDS since 2011.

On 20 November 2014, Massey University in New Zealand conferred Peng an Honorary Doctorate in recognition of her international contributions to performing arts, health, and education. Peng sang in a song-and-dance number in 2007 shown on Chinese television, that featured Tibetans thanking the Chinese military for liberating them.

All content from Kiddle encyclopedia articles (including the article images and facts) can be freely used under Attribution-ShareAlike license, unless stated otherwise. Cite this article:
Peng Liyuan Facts for Kids. Kiddle Encyclopedia.