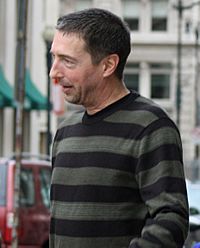 Ronald Prescott "Ron" Reagan (born May 20, 1958 in Los Angeles, California) is an American political commentator. He presents his commentary on the radio. He currently works for MSNBC as a political analyst.

Reagan is a Democrat and an atheist despite being the son of Republican President Ronald Reagan. His mother was Nancy Reagan. He is often incorrectly called Ronald Reagan Jr. or Ronald Reagan II. In 2011 he wrote a book on his father called My Father at 100.

All content from Kiddle encyclopedia articles (including the article images and facts) can be freely used under Attribution-ShareAlike license, unless stated otherwise. Cite this article:
Ron Reagan Facts for Kids. Kiddle Encyclopedia.