Royal Tombs of the Joseon Dynasty facts for kids 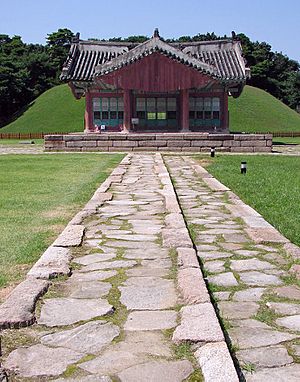 The tomb of King Jungjong.

The tombs show Confucian philosophy. The location of each tomb was chosen carefully. Most tombs have a hillside behind them and face a body of water. Many of them have mountains visible in the background. Many of the tombs have statues, burial mounds, shrines for ancestor worship and buildings for guards and groundskeepers.

Unlike royal tombs in many other parts of the world, the Joseon Royal Tombs have not been robbed by grave robbers. Whenever archaeologists examined a grave, they found the dead man or woman still had a crown, gold, jewels, or other valuable grave goods. As far as scholars can tell, the only people to ever dig up Joseon Royal Tombs were modern archaeologists, starting in 1930 during the Japanese occupation of Korea. That team was careful to treat the tomb with respect so that the people of Korea would not become angry. Scholars know which king or queen was buried in some tombs and do not know which king or queen was buried in other tombs. Archaeologists only dig up tombs whose owner is not known. 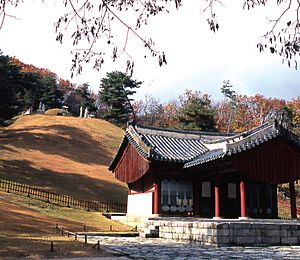 This building has a hill behind it.

All content from Kiddle encyclopedia articles (including the article images and facts) can be freely used under Attribution-ShareAlike license, unless stated otherwise. Cite this article:
Royal Tombs of the Joseon Dynasty Facts for Kids. Kiddle Encyclopedia.