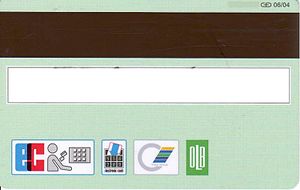 Backside of a bank card with a magnetic stripe

There are different ways in which the data is stored on the card. But all of them are read in much the same way, by "swiping" (sliding the card through a slot) on a machine called a reader. These readers can be separate from or built into other machines such as a payment terminal in a cash register or point of sale system.

Similar cards, which can also do calculations themselves, are called smart cards.

The standard ISO 7811 specifies the format in which information is stored on these cards. A magnetic stripe holds about 1024 bits of information, which is arranged in three tracks. The first track holds 76 alphanumeric characters, encoded in 7 bit per character. The two other tracks hold 37 and 104 numeric characters, encoded with 5 bits per character. The first two tracks can only be read, the third track can also be written to.

Cards that are used for banking used to store the PIN as a hash value on the magnetic stripe. Today, the ATM calculates the hash value, and transmits it to the server of the bank, which does the comparison. Storing the PIN in the ATM is no longer allowed.

In many payment cards around the world, magnetic stripes are being replaced with a more secure technology called EMV. Most of these cards, though, still have magnetic stripes to be used in places which do not yet work with EMV.

All content from Kiddle encyclopedia articles (including the article images and facts) can be freely used under Attribution-ShareAlike license, unless stated otherwise. Cite this article:
Magnetic stripe card Facts for Kids. Kiddle Encyclopedia.