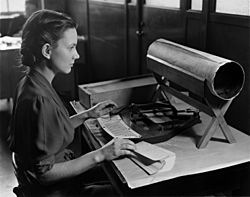 Herman Hollerith (February 29, 1860 – November 17, 1929) was an American statistician and inventor. He developed a mechanical tabulator based on punched cards. This tabulated (put into tables) the data from millions of people. He was the founder of the Tabulating Machine Company that later became IBM.

Hollerith is known as the father of modern machine data processing. The start of automatic data processing systems came with his invention. Programs and data were put in to computer by punched cards in the 1950s and 60s.

Hollerith began working for the United States Census Bureau in the year he filed his first patent application. Titled "Art of Compiling Statistics", it was filed on September 23, 1884; U.S. Patent 395,782 was granted on January 8, 1889.

Hollerith started his Tabulating Machine Company in 1896. Major census bureaus around the world leased his equipment and purchased his cards, as did major insurance companies. Hollerith's machines were used for censuses in England, Italy, Germany, Russia, Austria, Canada, France, Norway, Puerto Rico, Cuba, and the Philippines, and again in the 1900 United States Census . To make his system work, he invented the first automatic card-feed mechanism and the first keypunch (that is, a punch operated by a keyboard); a skilled operator could punch 200–300 cards per hour. He also invented a tabulator.

All content from Kiddle encyclopedia articles (including the article images and facts) can be freely used under Attribution-ShareAlike license, unless stated otherwise. Cite this article:
Herman Hollerith Facts for Kids. Kiddle Encyclopedia.