Clube Náutico Capibaribe, also known as Náutico, is a Brazilian sports club, including a professional football team, in Recife, Pernambuco. Náutico, as of 2013, is competing in the Serie A.

The origins of Náutico may be traced to the foundation of the Clube Náutico do Recife by a group of rowers ("Náutico" can be directly translated to "nautical") in 1898, but the official foundation date is April 7 of 1901. Its first football team dates back to 1905, with a squad formed by Englishmen and Germans.

Náutico is the only football club in Pernambuco that has won the state championship 6 times in a row (from 1963 to 1968). The club has an historical rivalry with local clubs Sport Recife and Santa Cruz.

Náutico has an important swimming arena, including an Olympic-sized pool that meets all world standards. It also has activities in other sports including hockey, basketball, volleyball, handball, women's football, futsal, tennis, Brazilian jiu-jitsu, table-tennis, judo, karate and the founding sport of the club, rowing. The official mascot of Náutico is the opossum, known locally as "timbu".

Náutico has the 6th-largest core of fans in the Northeastern region of Brasil, and occupies the 21st place in the overall Brazilian ranking. In total, there were approximately 1,5 million Náutico fans in 2010, as showed by a Lance magazine and IBOPE research. 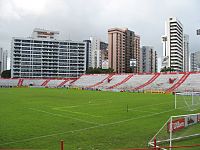 Náutico's stadium is the Estádio Eládio de Barros Carvalho, popularly known as the Estádio dos Aflitos, inaugurated on June 25, 1939. It was the first stadium in Pernambuco state, with a maximum capacity of 19,800 people. The stadium is named after Eládio de Barros Carvalho, who had fourteen spells as Naútico's president. Aflitos is so nicknamed because it is located in the Nossa Senhora dos Aflitos neighborhood.

All content from Kiddle encyclopedia articles (including the article images and facts) can be freely used under Attribution-ShareAlike license, unless stated otherwise. Cite this article:
Clube Náutico Capibaribe Facts for Kids. Kiddle Encyclopedia.