Purcellville is a town in Loudoun County, Virginia. The population was 8,929 according to the 2020 Census. Purcellville is the major population center for Western Loudoun and the Loudoun Valley. Many of the older structures remaining in Purcellville reflect the Victorian architecture popular during the early-20th century.

Although the first land grant in the area was issued by Lord Fairfax in 1740, it was not until 1764 that Purcellville's first known settler, James Dillon from Bucks County, Pennsylvania, arrived. The early ox cart track which wound westward from Leesburg towards the Blue Ridge, known later as the "Great Road," served as the town's nucleus, although farms existed in the area, and Ketoctin Baptist Church had been founded nearby by 1752. The first recorded business, an ordinary (a combined store and inn), was established by Abraham Vickers in 1799. This was followed by a second ordinary, established by Stacey Taylor in 1804, and later by "Purcel's Store" and Post Office, established by Valentine Vernon Purcell (from whom the town's name is derived). A blacksmith's shop, established around 1848, was also among the Purcellville's earliest businesses. On July 9, 1853 the village officially adopted the name Purcellville

The Great Road became an authorized turnpike in 1785 and extended the turnpike system westward from Alexandria to Snickers Gap, and beyond to Berryville and Winchester. With the construction of this Turnpike in 1832, travel through Purcellville began to increase and the first stagecoach arrived in 1841. A railroad on link on the Alexandria, Loudoun and Hampshire line (forerunner to the Washington and Old Dominion Railroad) connecting the town to Leesburg and points east was built prior to the Civil War, and travel to points further west were continued by stagecoach through Purcellville.

Although both Union and Confederate armies passed through Purcellville during the Civil War, the town witnessed limited fighting with the most notable action occurring at the skirmish of Heaton's Crossroads. The town and surrounding area were contained within the area known as Mosby's Confederacy, the main area of operations for Confederate partisan John S. Mosby, and the town was pillaged as part of The Burning Raid of 1864 in retribution for the area's support of Mosby's command.

When the railroad was extended to Purcellville in 1874, the town took Leesburg's place as the beginning of the stage route until the railroad was extended to Round Hill in 1875. The Southern Railway constructed the still-existing Purcellville Train Station in 1891. The railroad ceased operation in 1968. Its right-of-way serves as the Washington & Old Dominion Railroad Regional Park, which has its western terminus at the station.

The first public school was built in 1883. On March 14, 1908 the town was incorporated by an act of Virginia's General Assembly.

In the 20th century, a series of disastrous fires, the first in 1900 and then two more in 1914, virtually wiped out the business district, depriving the town of what remained of its earliest architectural heritage. The town's prominent location in the center of the Loudoun Valley and presence of the railroad helped the town to become the major agricultural center of western Loudoun and led to redevelopment and expansion of the business district in the early and mid 20th century. In the latter 20th century, widening of Virginia State Route 7 has led to increased suburban development in and around the town and Purcellville's traditional dependence upon agriculture as its primary source of income has since diminished as more and more residents are employed outside of the community .

According to the United States Census Bureau, the town has a total area of 3.1 square miles (8.0 km2), all of it land.

Purcellville lies in western Loudoun County, Virginia, in the heart of the Loudoun Valley, approximately 9 miles west of the County Seat of Leesburg, Virginia. Just to the west are the Blue Ridge Mountains (visible from many areas of town) and the town Round Hill, 4 miles (6.4 km) away. Philomont is 5 miles (8.0 km) miles south, and Middleburg, Virginia is approximately 12 miles (19 km) to the southeast. Lovettsville is approximately 11 miles (18 km) to the north.

The climate in this area is characterized by hot, humid summers and generally mild to cool winters. According to the Köppen Climate Classification system, Purcellville has a humid subtropical climate, abbreviated "Cfa" on climate maps. 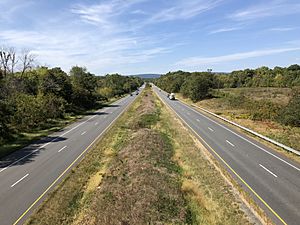 All content from Kiddle encyclopedia articles (including the article images and facts) can be freely used under Attribution-ShareAlike license, unless stated otherwise. Cite this article:
Purcellville, Virginia Facts for Kids. Kiddle Encyclopedia.