Round Hill is a town in Loudoun County, Virginia, United States. Its population was 539 at the 2010 census and an estimated 656 in 2019. The town is located at the crossroads of Virginia routes 7 and 719 (Woodgrove Road), approximately 50 miles (80 km) northwest of Washington, D.C. It was named "Round Hill" for being two miles northeast of a 910-foot (280 m) hill used during the American Civil War as a signal post by both Confederate and Union troops.

Round Hill was incorporated on February 5, 1900. From 1874 to 1900, the settlement had been the terminus of a Washington and Ohio rail line that ultimately became the Washington and Old Dominion Railroad. The railway allowed agricultural products to be brought into Washington, D.C., and allowed the residents of the District to escape to the surrounding countryside for holidays. Many of the town's older residences were originally boarding houses, inns, and taverns where people would go upon arrival. The town was considered a convenient destination as it lies close to the Shenandoah River (7 miles distant), the Shenandoah National Park (30 miles), the Appalachian Trail (4 miles), Harpers Ferry (15 miles), the Chesapeake & Ohio Canal Tow Path (used currently as a bike trail) (12 miles), and the paved Washington & Old Dominion Railroad Trail (3 miles).

The town has recently been ringed by fast-growing suburbs of Washington, D.C., that have brought thousands of residents to just outside the town. The town's water and sewer infrastructure is used to serve many of these new developments.

The Ketoctin Baptist Church, Round Hill Historic District, and Woodgrove are listed on the National Register of Historic Places.

According to the United States Census Bureau, the town has a total area of 0.2 square miles (0.52 km2), all of it land.

There were 202 households, out of which 40.6% had children under the age of 18 living with them, 59.9% were married couples living together, 12.9% had a female householder with no husband present, 4.0% had a male householder with no wife present, and 23.3% were non-families. 19.8% of all households were made up of individuals, and 5.5% had someone living alone who was 65 years of age or older. The average household size was 2.67 and the average family size was 3.06. 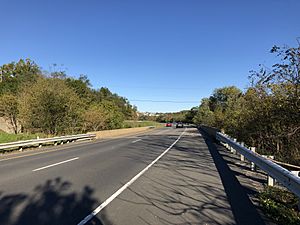 SR 7, the largest highway in Round Hill

No public schools lie within the town limits, though Round Hill Elementary School lies just outside, within the "Villages of Round Hill" subdivision. As of January 2013, the school listed 544 enrolled students. Secondary students are served by the Loudoun County Public School system, including Woodgrove High School in Purcellville.

Police protection is provided by the Loudoun County Sheriff's department. Fire protection and emergency medical services are provided by the Round Hill Volunteer Fire Department 4; the fire company and the rescue squad are volunteer organizations supplemented with staffing from the Loudoun County Fire and Rescue Department on a twenty-four-hour, seven-day-a-week basis.

The town maintains its own water and sewer system, which developers' proffers have supplemented in recent years.

The primary highway serving Round Hill is Virginia State Route 7. SR 7 extends eastward to Leesburg and beyond, eventually terminating in Alexandria, with interchanges at Interstate 495, Interstate 66 and Interstate 395. Towards the west, SR 7 passes Berryville before terminating at Winchester, where it interchanges with Interstate 81. The current alignment of SR 7 through Round Hill is a bypass of the original road through the middle of Round Hill, which now comprises SR 7 Business.

All content from Kiddle encyclopedia articles (including the article images and facts) can be freely used under Attribution-ShareAlike license, unless stated otherwise. Cite this article:
Round Hill, Loudoun County, Virginia Facts for Kids. Kiddle Encyclopedia.