Berryville is an incorporated town in and the county seat of Clarke County, Virginia, United States. The population was 4,185 at the 2010 census, up from 2,963 at the 2000 census.

Berryville was founded at the intersection of the Winchester Turnpike and Charlestown Road. The land was first granted by the Crown to Captain Isaac Pennington in 1734, and George Washington surveyed it on October 23, 1750. In 1754 Pennington sold it to Colonel John Hite. 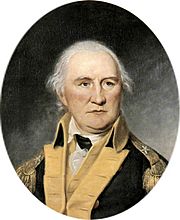 According to legend, Daniel Morgan would engage in combat with young toughs at the intersection, having first piled large stones nearby to use as ammunition in case of need. Because of this story, and a rowdy tavern nearby, the area was first given the informal name of "Battle Town".

Hite sold the tract in 1765 to his son-in-law, Major Charles Smith. Smith named his estate "Battle Town", and on the site of the former tavern he built a clapboard homestead. This structure still stands on what is now Main Street and is now known as "The Nook".

Daniel Morgan returned to the area after distinguishing himself in the Revolution, living at Saratoga, and briefly at Soldier's Rest. He was one of the frequent (and reputedly most quarrelsome) patrons of the new tavern (where now stands the Battletown Inn).

By 1810, the town had at least 25 homes, three stores, an apothecary (pharmacy), two taverns, and an academy (school). It was not much larger when it was designated as the county seat of newly formed Clarke County in 1836. An 1855 gazetteer described it as "a small town" that "has some trade, and contains an academy and 1 or 2 churches."

During the Civil War, Confederate General Jubal A. Early briefly had his headquarters in the town. Not long afterward the Battle of Berryville was fought in and around the town during the Valley Campaigns of 1864.

The railroad reached the town in the 1870s.

Virginia governor and U.S. senator Harry F. Byrd long resided in Berryville. A state senator in 1916, he built a log cabin named "Westwood" (a name he also gave his daughter) in Berryville at a family-owned orchard. The cabin was constructed from chestnut logs prior to the chestnut blight. In 1926, Byrd purchased Rosemont, an estate adjacent to his family's apple orchards in Berryville. He moved there with his family after his term as governor ended in 1929.

According to the United States Census Bureau, Berryville has a total area of 2.3 square miles (5.9 km2), all of it land. 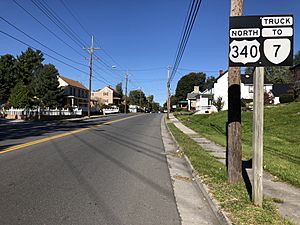 The climate in this area is characterized by hot, humid summers and generally mild to cool winters. According to the Köppen Climate Classification system, Berryville has a humid subtropical climate, abbreviated "Cfa" on climate maps.

Notable buildings or structures in Berryville

Berryville is located at the intersection of U.S. Route 340 and Virginia State Route 7. US 340 passes through the center of town, extending southwest to Front Royal and northeast to Charles Town. SR 7 bypasses the town just to the north, extending west to Winchester and east to Leesburg. US 340 also connects to Interstate 66 near Front Royal while SR 7 has a junction with Interstate 81 near Winchester. While SR 7 now bypasses downtown Berryville, SR 7 Business still passes through via Main Street.

All content from Kiddle encyclopedia articles (including the article images and facts) can be freely used under Attribution-ShareAlike license, unless stated otherwise. Cite this article:
Berryville, Virginia Facts for Kids. Kiddle Encyclopedia.