The series, written in a diary format, uses drawings, doodles, and comic strips to chronicle the daily life of its 14-year-old protagonist Nikki Maxwell.

Over 5 million copies of the Dork Diaries books are in print in the United States, and publishing rights have been sold in 32 countries with translation into 28 different languages.

The Misadventures of Max Crumbly spinoff

This spin-off series focuses on Maxwell Crumbly, the character introduced in Tales from a Not-So-Perfect Pet Sitter and, also written in diary format, his life in middle school. 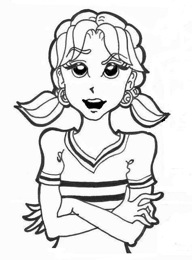 Nikki Maxwell depicted in one of her styles

The main character of the series and a new student at Westchester Country Day. Because Nikki feels completely out of place among all of the wealthy, designer clad students, she spends most of her time alone, writing in her diary. She despises her locker neighbor (and enemy), MacKenzie Hollister. Nikki is the most unpopular girl at her school (only slightly above the gym shower slime). Her secret is that she only attends the school because her dad arranged a scholarship as part of his contract as the bug exterminator. The stores she shops at are discount department ones such as Target. She has a major crush on Brandon Roberts. Her art skills are well above average and won WCD's art competition with the help of her friends in the first book. She is extremely bad at math. Nikki has a 6-year-old sister named Brianna, who is constantly causing trouble for Nikki. She is best friends with Chloe and Zoey and goes to art camp every summer. She has brown hair that is usually in pigtails and she is left-handed.

The most popular girl at Westchester Country Day and the leader of the CCP (Cute, Cool & Popular) Clique. She has a locker next to Nikki’s. MacKenzie always wears top designer outfits, carries expensive bags, and wears a lot of lip gloss. She too, has a crush on Brandon Roberts and tries to flirt with him by twirling her hair whenever possible. Mostly when Nikki is watching. MacKenzie does not like Nikki and calls her a dork. She talks behind Nikki's back and tries to wreck her life with the help of her best friend, Jessica. She has blonde hair, blue eyes, and an annoying little sister named Amanda, who is a lot like Brianna. Mackenzie is wealthy, spoiled, self-centered and mean. She entered the Avant-Garde Art competition and lost.

Nikki’s best friend. Chloe is an avid reader and loves young adult romances. She is a self-proclaimed expert on guys and dating and works in the library with Nikki and Zoey. She is described as somewhat prissy and socially outcast. Her parents own a software company. She is the fifth most unpopular girl at Westchester Country Day.

Zoey is Nikki’s other best friend. She is super smart and also an avid reader, she loves self-help books, and is a self-proclaimed expert in psychology. Zoey works in the school library with Nikki and Chloe. Her mother is an attorney and her father is a record executive. Her parents are divorced. Zoey's the third most unpopular girl in the school. Due to the clarification that Zoey looks like Beyoncé in the second book, it is clear that she is African-American.

Nikki's and MacKenzie's crush. He is not as impressed by MacKenzie as everybody else-it was an obvious note that he has more feelings for Nikki. In the second book, he asks her to the dance (see above). In the seventh book, he kissed Nikki. In the books, he is described as "super cute" with wavy hair and blue eyes. He is shy around Nikki. Brandon is a photographer for Westchester Middle School's newspaper, and the Dork Diaries: Tales From a Not-So-Talented Pop Star, it is revealed Brandon plays the drums and joins Nikki's band, "Actually, I'm Not Sure Yet". His parents died sometime before the series and he lives with his grandparents. He works in an animal center named Fuzzy Friends and loves being with the puppies there.

Nikki’s bratty little 6-year-old sister. Brianna, is afraid of the tooth fairy because Nikki told her the tooth fairy collects children's teeth to make dentures for old people. She has a friend named Miss Penelope (which is her own hand with a face drawn on it with an ink pen). She thinks Brandon has cooties.

The second highest-ranking CCPs at WCD and MacKenzie's best friend. She also dislikes Nikki and is more than super mean to her. Jessica has blonde hair and loves the color pink. Her last name (Hunter) was revealed in Dork Diaries 3 1/2: How to Dork Your Diary

The most popular girl out of the most unpopular people. When she signs up to run for chairperson of WCD's Halloween dance, she loses to MacKenzie Hollister and signs up for clean-up committee instead. When MacKenzie quits, Violet becomes head of the entertainment committee. She has a huge iTunes collection and is in a wheelchair. She appears in the second and third book. In Dork Diaries: Tales From a Not So Talented Pop Star, it is revealed Violet plays the piano. She is the pianist in Nikki's band, Actually, I'm Not Sure Yet.

One of the unpopular boys in WCD and one of Nikki's friends. He has a big crush on Mackenzie. He was later really happy to hear the bit of news that MacKenzie's date was the lead singer of the band, (as he was the lead singer) especially when he wanted to ask MacKenzie but was sure she would reject him. He is known for being the school nerd, and in Dork Diaries: Tales From a Not So Talented Pop Star, it is revealed he plays guitar. He is lead guitarist in Nikki's band, Actually, I'm Not Sure Yet. He hopes to one day go to Hogwarts.

Nikki meets Marcy through her post as Miss-Know-It-All. Marcy sends an anonymous letter to Miss Know-It-All, saying that she's new, being bullied by some other girls, and can't find friends. Nikki tells her to hang in there, and keeps a look out for the new girl. She soon finds it's Marcy, and invites her to Brandon's birthday party, where Marcy has a great time. Marcy is MacKenzie's assistant fashion director for the newspaper, but is bullied by MacKenzie, and is deemed to be unfashionable by the latter. Marcy wears sports glasses and has short hair.

In March 2014, Summit Entertainment acquired the movie rights to the series. Karen Rosenfelt is in negotiations to produce.

All content from Kiddle encyclopedia articles (including the article images and facts) can be freely used under Attribution-ShareAlike license, unless stated otherwise. Cite this article:
Dork Diaries Facts for Kids. Kiddle Encyclopedia.