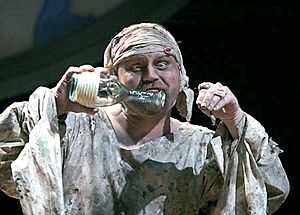 Caliban has a conversation with his imaginary friends in Folger Theatre's production of Shakespeare's The Tempest.

Imaginary friends (also known as pretend friends, invisible friends or made-up friends) are a psychological and social phenomenon where a friendship or other interpersonal relationship takes place in the imagination rather than external physical reality. Although they may seem very real to their creators, children usually understand that their imaginary friends are not real. The first studies focusing on imaginary friends are believed to have been conducted during the 1890s. There is little information about the development and the appearance of imaginary friends in children. However, Klausen and Passman (2007) report that imaginary companions were originally described as being supernatural creatures and spirits that were thought to connect people with their past lives. Adults in early historic times had entities such as household gods and guardian angels, and muses that functioned as imaginary companions to provide comfort, guidance and inspiration for creative work. Eventually, the phenomenon of imaginary companions passed on to children. The era when children began having imaginary friends is unknown, but it is possible the phenomenon appeared in the mid–19th century when childhood was emphasized as an important time to play and imagine.

All content from Kiddle encyclopedia articles (including the article images and facts) can be freely used under Attribution-ShareAlike license, unless stated otherwise. Cite this article:
Imaginary friend Facts for Kids. Kiddle Encyclopedia.