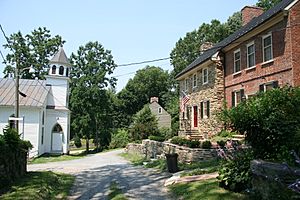 The intersection of Bond Street and Liggett Street in Waterford

Waterford is an unincorporated village in the Catoctin Valley of Loudoun County, Virginia, located along Catoctin Creek. Waterford is 47 miles (76 km) northwest of Washington, D.C., and 7 miles (11 km) northwest of Leesburg. The entire village and surrounding countryside is a National Historic Landmark District, noted for its well-preserved 18th and 19th-century character.

In the 1810 United States Census, the population center of the United States was recorded as being just northwest of the village.

Waterford was established around 1733 by Amos Janney, a Quaker from Bucks County, Pennsylvania. Janney purchased 400 acres (1.6 km2) on the south fork of Catoctin Creek and established a grist mill and saw mill in the area in the 1740s. Due to the success of the mills, the settlement became known as "Janney's Mill". The town grew quickly as a center of commerce for growers of grain.

Amos Janney died in 1747, leaving his estate to his sixteen-year-old son, Mahlon. Mahlon replaced the original log mill with a two-story structure. The village continued to grow, and in 1780, 12 acres (49,000 m2) on the south side of Main Street were subdivided into 15 lots, upon which shops and homes were built. By the 1790s, the village was known as Waterford, named after the city of Waterford, in Ireland, where some of its founders had once lived before immigrating to the United States. New residents continued to come from Pennsylvania, as Quakers were followed by Presbyterians, Lutherans, Baptists, and Methodists. Waterford was also populated by African-Americans, both free and enslaved.

By the start of the Civil War, the population of Waterford remained largely Quaker. As pacifists and abolitionists, the Quakers remained loyal to the Union throughout the war. Waterford was the scene of a fierce fight between the county's Unionist and Confederate partisan units, the Loudoun Rangers and White's Rebels, respectively. In those days, it was the home for mostly Quakers who helped slaves escape to the North.

The town today is largely residential, although a number of businesses are based in the village. The Loudoun Mutual Insurance Company has been located in Waterford since 1849.

The village was listed as a Virginia Historic Landmark in 1969. Waterford and a significant portion of its surrounding countryside was declared a National Historic Landmark in 1970. The designation was made in recognition of the town's well-preserved 18th and 19th-century architecture and landscape. Significant buildings include the mill (circa 1750), Arch House Row (circa 1750), Camelot School (circa 1800), the Hague-Hough house, which is Waterford's oldest house (circa 1740), and the 1882 Presbyterian church.

The Catoctin Creek Bridge was listed on the National Register of Historic Places in 1974, and the William Virts House was listed in 2011.

All content from Kiddle encyclopedia articles (including the article images and facts) can be freely used under Attribution-ShareAlike license, unless stated otherwise. Cite this article:
Waterford, Virginia Facts for Kids. Kiddle Encyclopedia.