Brunswick is a city in southwestern Frederick County, Maryland, United States. The city is located on the north bank of the Potomac River; Loudoun County, Virginia occupies the opposite shore. The population of Brunswick was 7,762 at the 2020 census. There are three schools serving Brunswick: Brunswick Elementary School, Brunswick Middle School, and Brunswick High School.

The area now known as Brunswick was originally home to the Susquehanna Indians. In 1728 the first settlement was built, and the region became known as Eel Town, because the natives would fish for eel in the Potomac River. A grant to the land was then given to John Hawkins by George II of Great Britain on August 10, 1753. The grant had the name "Hawkins Merry-Peep-o-Day".

The land was sold and Leonard Smith platted it in 1787 with the name of “Berlin,” as many Germans settled in the area. The name “Berlin,” however, could not be used for mail as there was already a Berlin on the Eastern Shore of Maryland, so the post office changed the name to "Barry." The town continued to grow and was incorporated April 18, 1890 with the name “Brunswick.”

Established along the now-defunct Chesapeake and Ohio Canal, the city became a hub for the Baltimore and Ohio Railroad, which built a six-mile-long rail yard along the Potomac from 1891 to 1912, boosting the population to over 5,000, and making Brunswick virtually a company town. The railroad reduced its yard operations in the 1950s.

Today Brunswick is home to a commuter rail station serving Washington, D.C.. It is home of the Brunswick Heritage Museum which interprets the history of the city and is home of a large model railroad showing why the city's location was important to the railroad. 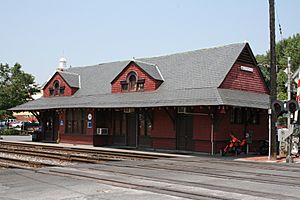 The historic Baltimore and Ohio Railroad Station (1891), one of the city's landmarks.

The largest city-wide event is "Railroad Days" on the first weekend in October, a festival celebrating the city's heritage. Another major annual event is the Veterans Day Parade, which has taken place each year since 1932. Other events year round include the Wine and Chocolate Walk in September, Farmers' Market, Arts In The Parks, Little League opening day, and other city and museum events.

The city markets its historic downtown and its access to recreational activities on the C&O Canal and Potomac River. The city's history is preserved in the Brunswick Heritage Museum (formerly the Brunswick Railroad Museum), established in 1974. The historic commercial district of the city along Potomac Street features antique stores, restaurants, a brewpub, a yoga studio, a martial arts studio, a beauty salon, a bakery, and a hardware store in the downtown area. There are live music performances many nights of the week at Beans in the Belfry, a café located in the restored former First Evangelical and Reformed Church (built in 1910).

There were 2,155 households, of which 38.5% had children under the age of 18 living with them, 51.6% were married couples living together, 13.7% had a female householder with no husband present, 5.0% had a male householder with no wife present, and 29.7% were non-families. 23.2% of all households were made up of individuals, and 8.8% had someone living alone who was 65 years of age or older. The average household size was 2.72 and the average family size was 3.22.

The primary method of travel to and from Brunswick is by road. Several state highways serve the city, with the most prominent of these being Maryland Route 17. MD 17 heads south across the Potomac River into Virginia, where it becomes Virginia State Route 287. Just north of Brunswick, MD 17 has junctions with Maryland Route 464, Maryland Route 79, Maryland Route 180, Maryland Route 871 and U.S. Route 340, which provides access to numerous locations across Frederick County. Aside from MD 17, portions of MD 180, MD 464 and Maryland Route 478 also traverse the city.

MARC operates commuter trains from Martinsburg, West Virginia, through and stopping at Brunswick then south to Union Station, Washington, D.C.

All content from Kiddle encyclopedia articles (including the article images and facts) can be freely used under Attribution-ShareAlike license, unless stated otherwise. Cite this article:
Brunswick, Maryland Facts for Kids. Kiddle Encyclopedia.