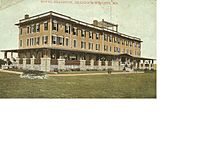 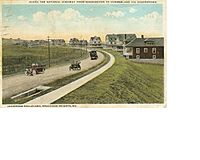 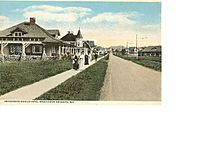 Braddock Heights is an unincorporated community and census-designated place (CDP) in Frederick County, Maryland, United States. The population was 2,608 at the 2010 census. The local ZIP codes are 21714 (post office boxes only) and 21703.

Braddock Heights is located at an elevation of 950 feet (290 m) atop Braddock Mountain (as Catoctin Mountain is locally known) near the pass at Braddock Springs, so named after British General Edward Braddock and Lt. Colonel George Washington's use of the mountain pass on their way to Fort Duquesne during the French and Indian War on April 29, 1755. During the Civil War, Braddock Heights was the site of a minor cavalry battle between generals J.E.B. Stuart (CSA) and Alfred Pleasonton (USA) on September 13, 1862; it was at that time known as "Fairview Pass". One mile east of Braddock Heights, near the base of Braddock Mountain, are the older communities of Clifton and Old Braddock.

The picturesque view of the city of Frederick from Old Braddock—also known as "Fairview", elevation 550 feet (170 m)—was the inspiration for Oliver Wendell Holmes, Sr. to record in his 1862 journal:

Braddock Heights was one of the first modern planned communities in the United States, and custom housing development has continued since 1901. Braddock Heights is now known for its eclectic houses (no two are alike) and its scenic views of Frederick and the Monocacy and Middletown valleys. Following the end of World War II and the decline of the amusement park, Braddock Heights' demographic changed from commercial summer boarding houses to that of an unincorporated community with permanent residents.

Braddock Heights was once home to the oldest roller rink in the United States, the Stargaze Skateway. It burned to the ground as the result of arson on August 18, 1998.

Braddock Heights is said to be the roost of the mythic Snallygaster, a chimeric bird-like creature claimed to be responsible for the disappearance of livestock, and the occasional Middletown Valley resident, since the mid-18th century.

It was also the home of the Schley Inn, a combined hotel and restaurant formerly owned by Hermann Fischer of Germany.

The Hagerstown & Frederick Railway, a suburban (later interurban) trolley system, was developed by George William Smith and initially called the Frederick & Middletown Railway. Service between Frederick and Braddock Heights commenced on August 22, 1896. The Jefferson branch was added in 1906, running down the east side of Jefferson Boulevard. The right of way is still visible as a strip between the set-back sidewalk and the street.

Service to Jefferson lasted until 1940, although a short section was kept open to serve the Vindobona Hotel. Service to Braddock Heights and Middletown from Frederick was finally discontinued in 1946.

There were 1,684 households, out of which 35.9% had children under the age of 18 living with them, 69.9% were married couples living together, 7.1% had a female householder with no husband present, and 20.2% were non-families. 15.0% of all households were made up of individuals, and 5.1% had someone living alone who was 65 years of age or older. The average household size was 2.71 and the average family size was 3.03.

Braddock Heights is part of the Middletown School District.

All content from Kiddle encyclopedia articles (including the article images and facts) can be freely used under Attribution-ShareAlike license, unless stated otherwise. Cite this article:
Braddock Heights, Maryland Facts for Kids. Kiddle Encyclopedia.