Jefferson is an unincorporated community and census-designated place (CDP) in Frederick County, Maryland, United States. As of the 2010 census it had a population of 2,111. It was established in 1774 and incorporated as a town in 1831. However, a year later, in 1832, the citizens of the town decided that municipal government was unnecessary, and disincorporated the town.

According to archaeologist Mary F. Barse, Jefferson was initially laid out in 1774 on a 96-acre (390,000 m2) tract owned by Mrs. Eleanor Medley and called "New Town". It contained 40 rectangular lots – 20 aligned on each side of MD 180 – stretching between what are now Lander Road and Old Middletown Road. In 1795, 22 additional lots were platted by Elias Delashmutt on the western end of the original section, and called "New Freedom". In 1831 both sections were incorporated as "Jefferson" by the Maryland Legislature.

Jefferson's growth in the 19th century was due largely to its location on the main road between Frederick and Harpers Ferry, today's U.S. Route 340. Wagon traffic and livestock drives were frequent. Concomitantly, commercial development intensified to serve the surrounding farms as well as travelers. As a center of agricultural mercantilism, throughout most of the late 18th and 19th century Jefferson was also home to a sizable population of slaves.

The Hagerstown and Frederick Railway linked Jefferson to Frederick and Hagerstown in 1907. However, Maryland Route 180 remained the only link to the closest steam powered rail station in Brunswick. 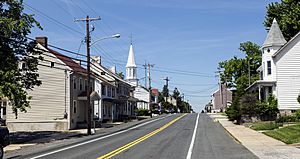 The center of Jefferson

Examined historic maps (Griffith 1795; Bond 1858; Martenet 1865, 1885; Lake 1873; USGS1910) depict Jefferson on what is now MD 180 as early as 1795. It is designated "Trap Town" at the close of the 18th century by Griffith (1795). Local history suggests that the name derives from the large number of taverns operating at the time. Purportedly, taverns were situated at both ends of town. Consequently, a traveler could be "trapped" on the way in or out of town.

The Lewis Mill Complex and the George Willard House are National Register of Historic Places properties near Jefferson.

Jefferson is in southwestern Frederick County at the western base of Catoctin Mountain. Maryland Route 180 passes through the town, and U.S. Route 340 bypasses it to the south, former the southern edge of the CDP. US 340 leads northeast 9 miles (14 km) to Frederick, the county seat, and southwest 13 miles (21 km) to Harpers Ferry, West Virginia.

Mar-Lu-Ridge Summer Camp and Education and Conference Center, located on the crest of Catoctin Mountain 4 miles (6 km) south of Jefferson, has been a main retreat and outdoor ministry site for the Evangelical Lutheran Church in America since 1959.

All content from Kiddle encyclopedia articles (including the article images and facts) can be freely used under Attribution-ShareAlike license, unless stated otherwise. Cite this article:
Jefferson, Maryland Facts for Kids. Kiddle Encyclopedia.