The name "Monocacy" comes from the Shawnee name for the river Monnockkesey, which translates to "river with many bends." (However, another local tradition asserts that "Monocacy" means "well-fenced garden" in an Indian language.) The first town ever settled in Western Maryland, Monocacy, also gets its name from this river.

The Monocacy National Battlefield lies alongside part of the river, marking an 1864 engagement during the American Civil War, the Battle of Monocacy Junction. The Chesapeake and Ohio Canal crosses over the river at the Monocacy Aqueduct, the largest of the 11 aqueducts on the canal. 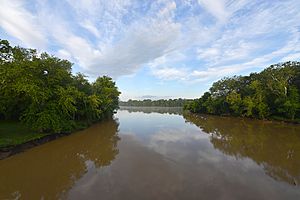 The Monocacy River (foreground) at its confluence with the Potomac River

The 970 square mile water shed averages a flow of 600 Mgd at the mouth where it enters the Potomac River. Dendrology of the Watershed:

The vegetation of the watershed is very similar to what one would expect to find through the Piedmont and valley and ridge regions. Some invasive species that threaten the balance of the ecosystem. A very good source for plant and tree information is the USDA-NRCS Plant Fact Sheets.

Some invasive species that threaten to disrupt the ecosystem of the watershed:

The State of Maryland designated the Monocacy as a Maryland Scenic River in 1974. However, it has one of the greatest nonpoint source pollution problems in the state due in large part to runoff from the 3,500 farms, livestock operations and dairies in the watershed. The Maryland Department of the Environment (MDE) has listed the Monocacy with impaired water quality for sediment and fecal coliform bacteria. A major tributary basin, the Double Pipe Creek watershed, is also impaired for sediment and bacteria.

Some farmers in the Monocacy watershed participate in the national Conservation Security Program operated by the U.S. Department of Agriculture (USDA), designed to help stem pollution due to erosion and pollutant runoff from farming. In the 1990s the watershed was part of a national water quality demonstration project sponsored by USDA, which helped farmers reduce fertilizer usage and reduced discharges of nitrogen and phosphorus to the river.

Point Source pollution within the watershed is fairly well identified and regulated with few options to further reduce inputs outside investment in better technologies to remove contamination from water to be discharged into the system. Because higher tech systems come at a higher cost it may be more effective for users to pay for removal of an equal or larger amount of nutrients from the system by installing natural storm water treatment features in urban and agricultural areas that will provide a better return on investment than trying the remove the last 5 mg/L of a nutrient out of wastewater discharge point. Generally nutrients from waste water can be reduced to around 10 ppm using low tech solutions, in order to achieve lower concentrations to meet TMDL’s higher technology systems must be used.

The benefits of developing green infrastructure are many and reach beyond water treatment they include :

Because parts of the watershed near are underlain by karst topography it will be important to ensure that we are not loading groundwater in those areas to avoid destabilizing the subsurface resulting in a sinkhole, but that does not limit the use of bio retention and infiltration trenches, as long as they are lined in those areas.

Bio filters in a laboratory setting have been shown to remove up to 85% of phosphorus, 70% nitrogen and 95% of suspended solids from storm water prior to discharge for a properly sized unit. (Bratieres et al., 2008) Although these results were observed in a controlled setting, a lower % removal would still make a significant impact in real world use given proper sizing and maintenance.

In urban areas the goal is to treat and address storm water where it falls and to mitigate storm surges in the water system that often increase the sediment, nutrient, and trash in the water course. This approach has an additional benefit of reducing scouring of the local stream beds to allow for stream bank stabilization. A side benefit is an increase in quality of life in hares with a high % of impervious surfaces, which often coincide with poorer areas in municipalities.

The state of Maryland has several good examples of storm water management systems in their design.

For both urban and agriculture areas but especially for the agricultural regions of the watershed, we should promote the use of vegetative buffer strips to protect streams whether herbaceous ( grasses and/or brush) or forested. Regardless of the type of buffer there is general consensus among practitioners that a minimum 35” buffer on either side of a waterway is a preferred for an effective buffer strip to have the greatest effect but as seen in the North Carolina State report on buffer use and effectiveness, even a 15 ‘ buffer would have a significant impact to stream and watershed health. (NCSU, 2016) There will need to be a bit of negotiation in how much land a farmer or landowner is willing to give up which may or may not be the optimum thickness, but we should be sensitive to what the minimum thickness required to make a significant difference and what can be implemented. Buffer strip effectiveness

Thicker and forested buffer strips provide the best return on value for stream protection and nutrient removal. They have an added benefit of adding richness in the biodiversity of the watershed and protection for fields from wind and water action helping to keep soils and nutrients on the property. Tree’s add to the quality of streams by reducing the water temperature through shading, and providing structure to the stream in the form of downed trees and snags within the waterway that provide habitat for many species.

Grass and shrub buffers are still beneficial to the health of the watershed and conserving nutrients and soil on surrounding landscapes through soil and bank stabilization and reduction of water velocity entering the stream system from overland flow.

The alliance is run out of the Frederick County Sustainability Office.

All content from Kiddle encyclopedia articles (including the article images and facts) can be freely used under Attribution-ShareAlike license, unless stated otherwise. Cite this article:
Monocacy River Facts for Kids. Kiddle Encyclopedia.