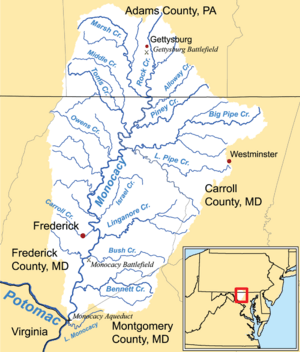 Double Pipe Creek, sometimes called Pipe Creek, is a major tributary of the Monocacy River in Carroll County and Frederick County in Maryland, located several miles north and west of Westminster. The creek is only 1.6 miles (2.6 km) long, but is formed by the confluence of two much longer streams, Big Pipe Creek and Little Pipe Creek.

The Maryland Department of the Environment (MDE) has identified water quality violations for Double Pipe Creek and tributaries, specifically for sediment, nutrients (nitrogen and phosphorus), and bacteria. The principal sources of bacteria appear to be failing septic tanks from residences and/or businesses, pet waste and waste from farm animals (livestock). The pollution sources for sediment include agricultural runoff and urban runoff. (Although agriculture is the predominant land use in the watershed, tributaries of Double Pipe Creek flow through portions of Westminster, Taneytown, New Windsor and Union Bridge.)

Since the 1970s, Carroll County commissioners have been proposing a dam or reservoir, defeated in 1976 by petition and raised again under the title of a proposed Union Mills Reservoir.

Before the battle broke out at Gettysburg, General Meade had planned a defensive position for the Army of the Potomac at Pipe Creek, making use of its broad slopes and open fields of fire. In the alternate history Gettysburg, by Gingrich and Forstchen, General Lee seizes Pipe Creek as his defensive line.

All content from Kiddle encyclopedia articles (including the article images and facts) can be freely used under Attribution-ShareAlike license, unless stated otherwise. Cite this article:
Double Pipe Creek Facts for Kids. Kiddle Encyclopedia.