Monocacy National Battlefield is a unit of the National Park Service, the site of the Battle of Monocacy in the American Civil War fought on July 9, 1864. The battlefield straddles the Monocacy River southeast of the city of Frederick, Maryland. The battle, labeled "The Battle That Saved Washington," was one of the last the Confederates would carry out in Union territory. The two opposing leaders were General Jubal Early, fighting for the South, and General Lew Wallace, fighting for the North. 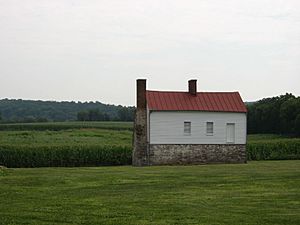 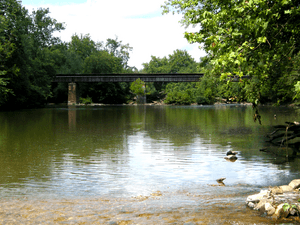 Much of the Monocacy battlefield remained in private hands for over 100 years after the Civil War. In 1928, Glenn Worthington, the owner of a large portion of the northern segment of the battlefield, petitioned Congress to create a National Military Park at Monocacy. Though the bill passed in 1934, the battlefield languished for nearly 50 years before Congress appropriated funds for land acquisition. Once funds were secured, 1,587 acres (6 km2) of the battlefield were acquired in the late 1970s and turned over to the National Park Service for maintenance and interpretation. The historic Thomas Farm, scene of some of the most intense fighting, was acquired by the National Park Service in 2001. Preservationists lost fights in the 1960s and 1980s when Interstate 270 was constructed and later widened, bisecting a portion of the battlefield. 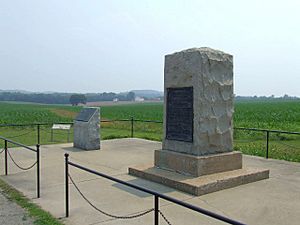 In the decades following the battle, a few veterans organizations placed commemorative markers to specific units on the battlefield, including the 14th New Jersey (dedicated in 1907), 87th Pennsylvania Infantry, and Vermont markers. In the years that have followed, other monuments have been added, including the Confederate Monument and Maryland Centennial Monument near the Best farm (the site where Union soldiers discovered Robert E. Lee's lost Special Order 191 during the 1862 Maryland Campaign). The National Park Service has since added wayside interpretive markers throughout the park.

The visitor center has been relocated from the historic Gambrill Mill to a new facility on the west side of the Monocacy River. It offers an electric map orientation program, an interactive computer program, interpretive displays, and artifacts of the battle. The visitor center is the starting point for a self-guided four-mile (6 km) auto tour and 1/2 mile (800 m) loop walking trail. National Park Service rangers and volunteers host battle walks, special programs, an auto tour and special events throughout the summer season. The interpretive Worthington Farm Trail, a pair of loops (one nearly two miles (3 km) long, the other 1.6 miles (2 km)) on the northern portion of the battlefield, allows the visitor to walk parts of the battlefield and explore the native flora of the region.

The National Park Service has recently established a General Management Plan to further interpret the area and acquire additional land if funding can be secured.

In 2013, Preservation Maryland placed the Monocacy National Battlefield on its list of threatened historic properties.

All content from Kiddle encyclopedia articles (including the article images and facts) can be freely used under Attribution-ShareAlike license, unless stated otherwise. Cite this article:
Monocacy National Battlefield Facts for Kids. Kiddle Encyclopedia.