Battle of Monocacy facts for kids 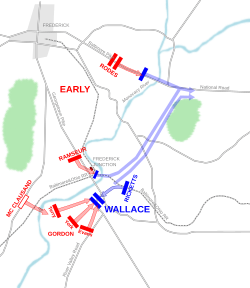 Map of the Battle of Monocacy

The Battle of Monocacy was one of the most important battles of the American Civil War. It was fought near Frederick, Maryland on July 9, 1864. A Confederate army commanded by Jubal Early was marching eastward towards Washington, D.C., to capture the city. A small Union army commanded by Lew Wallace fought the Confederates along the Monocacy River. The battle took most of the day to fight. The Confederates finally made Wallace's force retreat about 4:30 p.m. However, the delay kept the Confederates from reaching Washington until General Grant's soldiers reached the city. The Battle of Monocacy is sometimes called "the battle that saved Washington".

The Monocacy National Battlefield, established in 1976 as a unit of the National Park Service, covers 1,647 acres of the battlefield along the Monocacy River south of Frederick, Md. The address is 5201 Urbana Pike, Frederick, Md.

The Civil War Trust (a division of the American Battlefield Trust) and its partners have acquired and preserved 445 acres of the battlefield. some of which is now part of the park.

All content from Kiddle encyclopedia articles (including the article images and facts) can be freely used under Attribution-ShareAlike license, unless stated otherwise. Cite this article:
Battle of Monocacy Facts for Kids. Kiddle Encyclopedia.