Burkittsville is a town in Frederick County, Maryland, United States. The population was 151 at the 2010 census, a decline of 20 people from 2000.

According to the United States Census Bureau, the town has a total area of 0.45 square miles (1.17 km2), all of it land.

English settlement in this region began in the early 18th century. Land was being surveyed and patented in the south-western portion of the Middletown Valley beginning in the 1720s. The first land tract to be patented within the present boundaries of Burkittsville was "Dawson's Purchase," dated May 14, 1741. The Harley/Arnold Farm, located on the western border of the village at the base of South Mountain, stands on the "Dawson's Purchase" tract.

Burkittsville was first founded by two property owners: Major Joshua Harley and Henry Burkitt. The western half was first founded as "Harley's Post Office" in 1824. After Harley's passing in 1828, Burkitt renamed it Burkittsville. Over the next thirty years it grew as a community with stores, shops, blacksmiths, a schoolhouse, and a tannery.

On September 13, 1862, Confederate cavalry under command of Colonel Thomas Munford (under General J.E.B. Stuart) occupied Burkittsville. On Sunday, September 14, the forces of the Union and Confederate armies engaged in the Battle of Crampton's Gap, a bloody prelude to the Battle of Antietam. The Reformed and Lutheran churches and adjacent schoolhouse were used as hospitals for the more than 300 wounded of both sides. These buildings still stand today.

Routinely characterized as the trigger to Antietam, victory at Crampton's Gap embodied Union Gen. George B. McClellan’s strategic reaction to his acquiring the legendary “Lost Order” at Frederick which disclosed Confederate Gen. Robert E. Lee’s campaign movements. It was McClellan’s intention to “cut the enemy in two and beat him in detail”.

After seizing Crampton's Gap Gen. William B. Franklin failed to relieve the besieged Union garrison at Harpers Ferry, and more importantly to prevent Confederate generals James Longstreet and “Stonewall” Jackson from reuniting at Sharpsburg. There Lee hastily stood his ground in the mammoth battle of Antietam, the war’s bloodiest day. President Abraham Lincoln then used the marginal Union victory at Antietam as a springboard to his Emancipation Proclamation which changed war aims. Without the fall of Crampton's Gap there would have been no Antietam.

Nearly all of Burkittsville is a historic district, listed on the National Register of Historic Places on November 20, 1975. The 300 acres (120 ha) district includes about 70 contributing structures. The Burkittsville Historic District is itself part of the larger Crampton's Gap Historic District, which comprises the southern portion of the lands involved in the Battle of South Mountain, extending from the western side of Crampton's Gap, over South Mountain and about a mile to the east of Burkittsville. 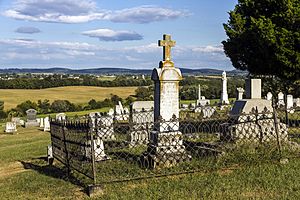 Union Cemetery in Burkittsville, established in 1831.

Burkittsville gained uninvited attention with the 1999 release of the film The Blair Witch Project and the franchise it spawned. "The poor town of Burkittsville suddenly found itself overrun with Blair Witch groupies, wandering around in the woods, trying to find the 'real' places where the story had happened." Contrary to popular belief, however, the majority of the film was not filmed in Burkittsville, but in Maryland's Seneca Creek State Park, about 25 miles (40 km) away, and the events depicted in the film and the legend of the Blair Witch itself are false. Furthermore, other potentially identifiable landmarks from the Blair Witch story - Coffin Rock, the Black Hills, Black Rock Road, and the local convenience store - are not located in the real Burkittsville or the immediate surrounding area. A Black Rock Road, Black Hills, and the "Blair High School" the interviewed girl mentioned can, however, all be found in Montgomery County, Maryland, which is very possibly not a coincidence as Blair Witch filmmaker Eduardo Sanchez grew up there and is an alumnus of Montgomery College.

A Burkittsville town welcome sign appeared briefly in the film, which featured cursive script with black and white coloring. As thievery of the town's welcome sign became more common due to the Blair Witch's increasing notoriety, the sign was radically redesigned to feature white letters and red stars against a blue background. The new sign also notes that the town has fewer than 200 people, was established in 1824, and is listed on the National Register of Historic Places.

There were 69 households of which 20.3% had children under the age of 18 living with them, 50.7% were married couples living together, 4.3% had a female householder with no husband present, 5.8% had a male householder with no wife present, and 39.1% were non-families. 34.8% of all households were made up of individuals and 10.1% had someone living alone who was 65 years of age or older. The average household size was 2.19 and the average family size was 2.79.

All content from Kiddle encyclopedia articles (including the article images and facts) can be freely used under Attribution-ShareAlike license, unless stated otherwise. Cite this article:
Burkittsville, Maryland Facts for Kids. Kiddle Encyclopedia.