The village of Petersville has a long and prominent heritage in the history of Frederick County and the State of Maryland. Located along a main east-west route which became the Harpers Ferry and Frederick Turnpike (later MD Route 180), Petersville grew as a stop along the turnpike with businesses to serve travelers as well as local farmers. The land on which Petersville is situated was originally patented by Captain John Colvill as the "Merryland Tract" on November 5, 1731, containing over 6,000 acres. Shortly after the Revolutionary War, Petersville began to develop as a village, with lots facing the turnpike route and four cross streets. The village also sat at the crossroads of one of the valley's north-south roads leading from Middletown to Berlin (today Brunswick). The 1808 Varle Map of Maryland shows Petersville. Five years later, in October 1813, the Petersville Post Office was established (it closed in 1909). The Maryland General Assembly established the Petersville District in 1829. 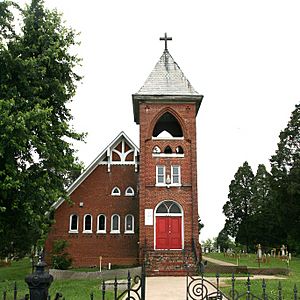 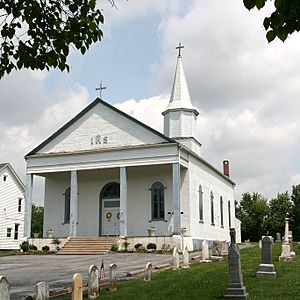 All content from Kiddle encyclopedia articles (including the article images and facts) can be freely used under Attribution-ShareAlike license, unless stated otherwise. Cite this article:
Petersville, Maryland Facts for Kids. Kiddle Encyclopedia.