Beginning in the second quarter of the 18th century, European settlers, mainly Germans and Swiss, began to populate the northern Middletown Valley. Their first permanent settlement was called Jerusalem, located west of the present-day town of Myersville. As settlers began to spread out in the valley, taking advantage of plentiful timber sources and fertile farm land, crossroad villages began to develop, including Wolfsville, named for the Wolf Family who were living within the present village by the 1830s. In 1848, the population had grown to an extant that the General Assembly established a new election district called Catoctin with Wolfsville at its center. That same year, Wolfsville was affixed as a stop for the stage lines carrying U.S. mail throughout Frederick County. In 1851, a local effort was launched to create a new county from several districts in north-western Frederick and north-eastern Washington Counties, but the Catoctin District voted unanimously against the proposal. 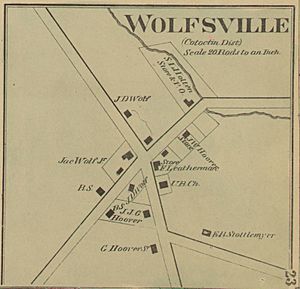 Wolfsville continued to grow as a commercial center for area farmers. By 1858, the village was served by two general stores, a tannery, and a blacksmith shop. Two decades later, the village had expanded with a total of three general stores, two blacksmith shops, and a post office. Many of these buildings, designed to serve both as commercial spaces and dwellings, remain well-preserved in Wolfsville today. By the turn of the twentieth century, the construction of the Hagerstown and Frederick Railway bypassed Wolfsville several miles to the south, bringing growth to the town of Myersville.

Today, Wolfsville retains much of its historic fabric with a high degree of integrity. Architectural styles range from early vernacular expressions of Greek Revival or Federal styles to late Victorian era examples of Queen Anne and Gothic Revival styles. Several buildings display their original dual use as dwellings and commercial spaces. One general store remains in operation today at the crossroads in the heart of Wolfsville, operated by the Harne Family since 1945. The Hoover Farm, situated on the southeastern edge of the village, preserves an early 19th century stone dwelling and barn, site of early religious meetings which later formalized into Wolfsville's churches. In the mid-19th century, Wolfsville had three churches: Lutheran, German Reformed, and United Brethren. Two of these congregations remain active today: St. Mark's Lutheran Church and Salem United Brethren Church, both built in 1847 out of native stone, but significantly altered since.

All content from Kiddle encyclopedia articles (including the article images and facts) can be freely used under Attribution-ShareAlike license, unless stated otherwise. Cite this article:
Wolfsville, Maryland Facts for Kids. Kiddle Encyclopedia.