Emmitsburg is a town in Frederick County, Maryland, United States, 0.3 miles (0.5 km) south of the Mason-Dixon line separating Maryland from Pennsylvania. Founded in 1785, Emmitsburg is the home of Mount St. Mary's University. The town has two Catholic pilgrimage sites: the National Shrine Grotto of Our Lady of Lourdes, which is on the campus of Mount St. Mary's, and the Basilica and National Shrine of St. Elizabeth Ann Seton, who was the first native-born United States citizen to be canonized as a saint. The Seton Shrine is one of the top eight Catholic pilgrimage destinations in the United States.

The National Emergency Training Center (NETC) campus is in Emmitsburg, located on the former campus of Saint Joseph College. The campus includes the Emergency Management Institute, the National Fire Academy and the National Fallen Firefighters Memorial.

Emmitsburg is home to three Cal Ripken Baseball 12U 46/60 baseball championships. The titles were won in consecutive years (2013, 2014, and 2015). For years, the youth baseball and softball league was the gold standard in the Catoctin area.

Emmitsburg was named for its founder, William Emmit in 1785. However, settlement preceded the town, particularly since British authorities restricted colonists' expansion during and after the French and Indian War.

The Tom's Creek Methodist Church was founded in 1757 for the benefit of settlers in the area (including William Emmit's father Samuel Emmit) as well as travelers. In the same year, Lutherans led by pastor George Bager built a church, which they shared with a German Reformed congregation until 1798 (and for a briefer time with a Presbyterian congregation). After the American Revolutionary War, Catholic missionary Rev. Jean Dubois established a mission church, and then seminary at Emmitsburg. Later Elizabeth Ann Seton established a convent, with a school and hospital. Soon, the number of Methodists in Emmitsburg led to the formation of a circuit around town, rather than share a minister with Gettysburg, Pennsylvania,

The Union fortified Emmitsburg to stop the Confederate invasion of the Union territory in June 1863 during the American Civil War. Half the town was burned to the ground in a mysterious fire on the night of June 23. Folklore has it that 'The Great Fire,' as it was known, was started by a Union sympathizer to prevent advancing Confederates from taking supplies from the town. However fate spared the town a battle between the opposing forces, which instead took place 12 miles north of it in Pennsylvania near the town of Gettysburg. The town was briefly held by the retreating Confederates on July 4.

According to the United States Census Bureau, the town has a total area of 1.52 square miles (3.94 km2), all of it land.

Emmitsburg is situated in the transition between the humid subtropical climate zone and the humid continental climate zone (Köppen Dfa), with hot, humid summers and moderately cold winters. It is known for being located near the base of Catoctin Mountain.

There were 997 households, of which 38.8% had children under the age of 18 living with them, 50.8% were married couples living together, 11.6% had a female householder with no husband present, 4.8% had a male householder with no wife present, and 32.8% were non-families. Of all households, 26.6% were made up of individuals, and 9.3% had someone living alone who was 65 years of age or older. The average household size was 2.64 and the average family size was 3.22. 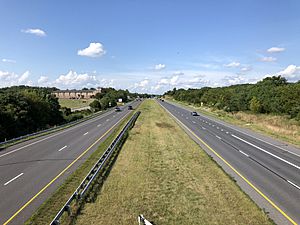 US 15 northbound in Emmitsburg

The primary method of travel to and from Emmitsburg is by road. U.S. Route 15 is the main highway serving Emmitsburg, providing connections northward to Gettysburg, Pennsylvania and southward to Frederick. U.S. Route 15 Business follows the old alignment of US 15 through the center of Emmitsburg, with the main highway now following a bypass on the east side of town. Maryland Route 140 is the other main highway traversing the town, which provides connections eastward towards Westminster and eventually Baltimore. To the west, MD 140 crosses into Pennsylvania and becomes Pennsylvania Route 16.

All content from Kiddle encyclopedia articles (including the article images and facts) can be freely used under Attribution-ShareAlike license, unless stated otherwise. Cite this article:
Emmitsburg, Maryland Facts for Kids. Kiddle Encyclopedia.