Point of Rocks is an unincorporated community and census-designated place (CDP) in Frederick County, Maryland, United States. As of the 2010 census it had a population of 1,466. It is named for the striking rock formation on the adjacent Catoctin Mountain, which was formed by the Potomac River cutting through the ridge in a water gap, a typical formation in the Appalachian Mountains. The formation is not visible from the town and can only be seen from boats on the river, or from the southern bank of the river in Virginia.

Point of Rocks is located in southern Frederick County, on the north bank of the Potomac River, and is bordered to the west by U.S. Route 15, which here runs along the eastern base of Catoctin Mountain. Via US 15 it is 13 miles (21 km) north to Frederick, the county seat, and 12 miles (19 km) south across the Potomac River to Leesburg, Virginia. Maryland Route 28 leads east from Point of Rocks through rural Frederick County and Montgomery County 29 miles (47 km) to Rockville, Maryland. 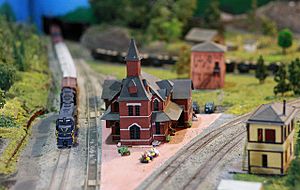 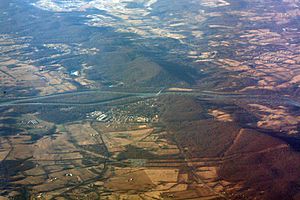 In 1828, the narrow passage between the river and Catoctin Mountain at this site provoked a violent legal battle between the Chesapeake and Ohio (C&O) Canal Company and the B&O Railroad over who could have control of the narrow pass. After years of disputes, both companies finally compromised and allowed both canal and railroad to build on the right-of-way through the passage, with a wall between the two to avoid trains scaring the mules that pulled the canal boats.

During the American Civil War, the town was often raided by Confederate partisans, such as John S. Mosby, Elijah V. White and John Mobberly, operating from Loudoun County, Virginia, across the river. The presence of the B&O Railroad and C&O Canal, along with many exiled Unionists from Loudoun County made the town an attractive target.

In 1864, upon arriving across the river from Point of Rocks, Mosby's Rangers found the village held by two companies of Federal infantry and two companies of cavalry in the form of the Loudoun Rangers, totaling 350 Federals in all. One of the companies of infantry inhabited Patton's Island in the middle of the Potomac, while the second occupied a small fort on high ground above the C&O Canal. The Loudoun Rangers were encamped in the village. Mosby immediately set to work clearing Patton's Island in preparation for crossing the river. He deployed Ranger Sam Chapman with his lone howitzer on the bluff above the river bank and ordered a detachment of sharpshooters under Lt. Albert Wrenn to wade into the river and attack the Federal position on the island. The Federal infantry exchanged fire with the Rangers for several minutes before giving way to the combined rifle and artillery fire and fled to the Maryland shore, tearing up the small bridge over the canal as they crossed it. The Rangers then dashed across the river to the Maryland shore where they began exchanging fire with the Federals across the canal. Many of the Rangers immediately set about repairing the bridge using planking from an old building. As soon as it was complete the Rangers ran across, led by Henry Hatcher who ran into the Union camp under heavy fire and captured its flag. Once across the canal the Rangers quickly drove the Federals from the town.[4]

With the Union garrison dispatched, the Rangers set about burning canal boats and cutting the telegraph wires that ran beside the river from Washington to its garrison at Harpers Ferry. Besides Point of Rocks' strategic value, it was also the refuge of many prominent Loudoun Unionists and their property, including the Loudoun Rangers' commander, Samuel C. Means. Thus, after effecting the disruption of travel and communication along the Potomac, the Rangers set about pilfering the stores and warehouses of the town, some of which contained property of Loudoun unionists. Because of the numerous pieces of fine clothing the Rangers returned with, the raid became known as the "Calico Raid". After completing the raid, the Rangers retired back to Virginia and camped along the road to Leesburg.

The following morning Mosby dispatched about 100 Rangers to escort the three wagons full of plunder back to Fauquier County. He also dispatched Rangers Fount Bettie and Harry Heaton to report to General Early, who was camped near Antietam Creek, with the message that Mosby's command would coordinate with his. Mosby then led his Rangers back to Point of Rocks to continue his raid into Maryland. The actions of the Rangers, however, had not gone unnoticed in Washington, and after learning of the raid, Maj. Gen. Henry Halleck dispatched the 8th Illinois Cavalry from Washington to Point of Rocks.[5] When the Rangers arrived at the banks of the Potomac they found the 8th Illinois holding the village. A 90-minute firefight across the river ensued, in which the 8th Illinois claimed to kill one and wound two rangers while suffering no casualties themselves (Mosby made no record of any casualties), before Mosby broke off the attack and headed south towards Leesburg. The 8th Illinois were soon dispatched from Point of Rocks to Monocacy Junction, where Union Maj. Gen. Lew Wallace was assembling a rag-tag force to oppose Early's drive on Washington, and along with the Loudoun Rangers, would fight in the Battle of Frederick and the Battle of Monocacy.

In 2001 Duke Energy filed an application with the Maryland Public Service Commission to construct a power plant on the north edge of town. In November 2002, however, Duke officially canceled its proposal, though it retains property in the area.

The Point of Rocks railroad station was listed on the National Register of Historic Places in 1973, and St. Paul's Episcopal Church was listed in 1978.

Older portions of the town are on the Potomac River floodplain and have been repeatedly inundated. An ongoing Federal Emergency Management Agency program to reduce flood insurance payouts has resulted in the purchase and demolition of a large portion of structures on the lowest-lying properties.

The community contains the Point of Rocks Bridge of U.S. Route 15 over the Potomac River into Virginia. The bridge is the first such crossing of the river upstream of the American Legion Memorial Bridge on I-495 in Montgomery County. The only other crossing between them is White's Ferry.

Rail service through Point of Rocks began with the 1834 opening of the Baltimore and Ohio Railroad's main line, which ended at the next stop in Sandy Hook, Maryland, before the Harpers Ferry Crossing across the Potomac and into Virginia opened in 1839.

Point of Rocks is a passenger station stop on the MARC Brunswick Line. The station, designed by Ephraim Francis Baldwin, was built by the Baltimore and Ohio (B&O) Railroad and completed in 1876. Marking the junction between CSX's Metropolitan Subdivision (the current main line) and the Old Main Line Subdivision, it remains one of the former B&O's signature landmarks, and is a popular subject of railroad photography.

All content from Kiddle encyclopedia articles (including the article images and facts) can be freely used under Attribution-ShareAlike license, unless stated otherwise. Cite this article:
Point of Rocks, Maryland Facts for Kids. Kiddle Encyclopedia.