Dover is a borough in York County, Pennsylvania, United States. The population was 2,007 at the 2010 census. 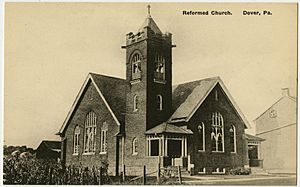 Dover United Church of Christ on a vintage postcard

During the 1863 Gettysburg Campaign of the American Civil War, Dover was briefly occupied overnight, June 30 – July 1, by Confederate cavalry under J.E.B. Stuart.

Dover was incorporated in 1864, 100 years after its founding.

The Englehart Melchinger House was listed on the National Register of Historic Places in 1992.

There were 770 households out of which 30.3% had children under the age of 18 living with them, 47.9% were married couples living together, 10.1% had a female householder with no husband present, and 36.4% were non-families. 28.2% of all households were made up of individuals and 5.8% had someone living alone who was 65 years of age or older. The average household size was 2.34 and the average family size was 2.90.

Dover received national attention in 2004–05, after the Dover Area School District voted to include the following statement about intelligent design in the biology curriculum of its schools:

The Pennsylvania Academic Standards require students to learn about Darwin's Theory of Evolution and eventually to take a standardized test of which evolution is a part.

Because Darwin's Theory is a theory, it continues to be tested as new evidence is discovered. The Theory of Evolution, while technically not a fact, is the most widely accepted amongst the scientific community. Gaps in the Theory of Evolution exist for which there is no evidence; however, these gaps are becoming much less prevalent through modern science. A theory is defined as a well-tested explanation that unifies a broad range of observations.

Intelligent Design is a religious explanation of the origin of life that differs from Darwin's view. The reference book Of Pandas and People is available for students who might be interested in gaining an understanding of what Intelligent Design actually involves.

With respect to any theory, students are encouraged to keep an open mind. The school leaves the discussion of the Origins of Life to individual students and their families. As a Standards-driven district, class instruction focuses upon preparing students to achieve proficiency on Standards-based assessments.

The controversial statement by the school board triggered the court case Kitzmiller v. Dover Area School District in late 2005. The case was resolved on December 20, 2005, when Judge John E. Jones III ruled that the Dover Area School District cannot teach Intelligent Design in a science class room, due to its religious origins. The separation of church and state principle, as derived from the First Amendment to the United States Constitution, prohibits any government agency from endorsing religious points of view.

In an upset election on November 8, 2005, the eight Republican school board members who voted for the language were all defeated by the challengers from the Dover Cares slate—four Democrats and four Republicans, forced by election rules to run on the Democratic ticket—who opposed the teaching of intelligent design in a science class.

Over the past few years Dover has incorporated a Comparative Religion course as an elective for students who want to learn more about all the religions of the world.

Two days after the upset, Pat Robertson commented on the election results on The 700 Club:

I'd like to say to the good citizens of Dover: If there is a disaster in your area, don't turn to God. You just rejected Him from your city.

He later revisited his previous warning:

God is tolerant and loving, but we can't keep sticking our finger in His eye forever. If they have future problems in Dover, I recommend they call on Charles Darwin. Maybe he can help them.

All content from Kiddle encyclopedia articles (including the article images and facts) can be freely used under Attribution-ShareAlike license, unless stated otherwise. Cite this article:
Dover, Pennsylvania Facts for Kids. Kiddle Encyclopedia.