Dillsburg is a borough in York County, Pennsylvania, United States. The population was 2,563 as of the 2010 census.

Dillsburg is surrounded by Carroll Township in northwestern York County, Pennsylvania. According to the United States Census Bureau, the borough has a total area of 0.8 square miles (2.1 km2), all of it land.

The town is named for Matthew Dill, an immigrant from County Monaghan, Ireland, who settled the town in 1740. The village became a center for local agriculture.

Dill's Tavern, founded in the 1750s with a current building constructed between 1794 and 1819, and the Rev. Anderson B. Quay House are listed on the National Register of Historic Places. 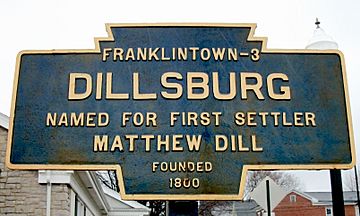 There were 902 households, out of which 30.3% had children under the age of 18 living with them, 50.1% were married couples living together, 10.8% had a female householder with no husband present, and 35.7% were non-families. 31.8% of all households were made up of individuals and 14.7% had someone living alone who was 65 years of age or older. The average household size was 2.29 and the average family size was 2.89.

Dillsburg's Farmers' Fair celebration is held annually during the third weekend in October. Among the many attractions are the parades on Friday and Saturday evenings, the classic car and farm tractor parade Saturday afternoon, and Civil War reenactments at the nearby Dill's Tavern. A wide variety of food can be found, from common concessions to specialty theme items such as fried pickles and pickle soup.

All content from Kiddle encyclopedia articles (including the article images and facts) can be freely used under Attribution-ShareAlike license, unless stated otherwise. Cite this article:
Dillsburg, Pennsylvania Facts for Kids. Kiddle Encyclopedia.