Hanover is a borough in York County, Pennsylvania, 19 miles (31 km) southwest of York and 54 miles (87 km) north-northwest of Baltimore, Maryland and is 5 miles (8.0 km) north of the Mason-Dixon line. The town is situated in a productive agricultural region. The population was 15,289 at the 2010 census. The borough is served by the 717 area code and the Zip Codes of 17331-34. Hanover is named after the German city of Hannover.

In 1727, John Digges, an Irish nobleman of Prince George's County, Maryland, obtained a grant of 10,000 acres (40 km2) of land where Hanover is now located from Charles Calvert, the fourth Lord Baltimore. The area was called Digges Choice, and in 1730, a group of Catholics started the settlement that became known as the Conewego Settlement. Settlers from both Maryland and Pennsylvania began moving into the area in the 1730s. At this time, the northern border of Maryland and the southern border of Pennsylvania did not agree with each other, and the area that is now Hanover was in the disputed area claimed by both states. This led to numerous disputes about property ownership from the 1730s until 1760. The dispute was settled when Maryland and Pennsylvania hired British experts Charles Mason and Jeremiah Dixon to survey what became known as the Mason–Dixon Line. This line was surveyed between 1763 and 1767, and put an end to decades of disputes over rights and ownership.

In 1745, a Scotch-Irishman named Richard McAllister purchased the tract of land upon which the original town of Hanover was built. McAllister was a Presbyterian who had recently migrated from the Cumberland Valley. Hanover at that time was covered with a dense forest of hickory, walnut, and oak trees. McAllister erected a log house at what is now the corner of Baltimore and Middle streets, and opened a store and tavern. In 1763, McAllister divided his farm into lots and founded the town of Hanover. German settlers nicknamed the settlement "Hickory Town" after the thick groves of hickory trees that grew in the area. The name Hanover was suggested by Michael Tanner, who was one of the commissioners who laid out York County in 1749 and owned large tracts of land southeast of the town. Tanner's choice of the name came from the fact that he was a native of Hanover, Germany. The town's founders, who wanted to please the German settlers, agreed to the name. Hanover was also sometimes referred to as "McAllister's Town" in its early years.

Hanover and the American Revolution

Thomas Jefferson spent the night of April 12, 1776 at the Sign of the Horse, an inn, owned by Caspar Reinecker on Frederick Street. Records indicate that Jefferson paid "Rhenegher" 11 shillings, 6 pence for dinner and lodging. He was on his way from Monticello to Philadelphia to attend the first meeting of the Continental Congress, where on June 10 he would begin the draft the Declaration of Independence. At the time, Hanover was located at the crossing of two well-traveled roads, one from the port of Baltimore to points north and west and the other between Philadelphia and the Valley of Virginia. When Jefferson returned from Philadelphia to Monticello, he again dined and spent the night of September 5 at Reinecker's inn.

At the start of the Revolutionary War, Hanover consisted of about 500 homes, most of which were built out of logs. After the war, the population increased steadily until the War of 1812. At the time of the advance of the British on Baltimore in 1814, Hanover and vicinity furnished two companies of infantry commanded by Captain Frederick Metzgar and John Bair. These two companies left Hanover on foot Sunday morning, August 28, 1814, and reached the city of Baltimore at 9 A.M., Tuesday. September 11, where they were marched to North Point, spending that night on their arms, and next day, the memorable September 12, 1814, they took part in the engagement with the British, who retreated soon after. The Hanover Companies together with other companies from York County, returned home after two weeks' service, not being needed longer.

After the War of 1812, the town experienced only minor growth until 1852, when construction of the Hanover Branch Railroad to Hanover Junction was completed. In 1858 the Gettysburg Railroad opened a railroad link westward to Gettysburg. The Hanover and York Railroad completed a rail line to York in 1876. 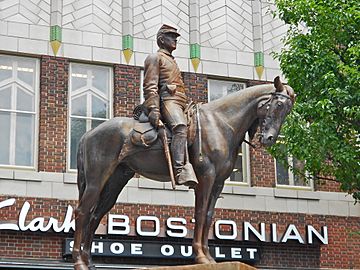 The sculpture Sentry, erected in Center Square in 1904, shows a Union cavalry soldier on sentry duty.

During the American Civil War, the Battle of Hanover was fought on June 30, 1863. Union cavalry under Judson Kilpatrick encountered Confederate cavalry under J.E.B. Stuart and a sharp fight ensued in the town and in farm fields to the south, particularly along Frederick Street. The inconclusive battle delayed the Confederate cavalry on their way to the Battle of Gettysburg. Three days before the battle, another detachment of Virginia cavalry had briefly occupied Hanover, collecting supplies and horses from local citizens.

The town has lent its name to a brand of canned vegetables, and a mail-order gift company based there. Hanover's first newspaper, Die Pennsylvania Wochenschrift, was published in German in 1797. In 1805, the "Hanover Gazette" followed suit, also published in German.

The Greater Hanover area has a population of about 55,000 residents. The community is made up of several areas such as Hanover Borough, Penn Township, Heidelberg Township, Manheim Township, West Manheim Township, Conewago Township, Berwick Township, and Union Township. All of these areas have Hanover, PA listed as their address. 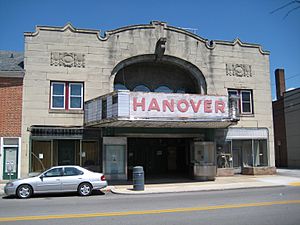 Some local places of interest in the Hanover area include:

The Hanover area is served by Pennsylvania Routes 94, 194, 116, and 216. Route 94 (Carlisle Street/Pike and Baltimore Street/Pike) intersects with Route 194 at the square and extends north to Carlisle, PA and south to Baltimore, MD. Route 194 (Broadway/Abbottstown Pike and Frederick Street/Hanover Pike) intersects with Route 94 and Route 116 at the square and extends north to Dillsburg, PA and south to Frederick, MD. Route 116 (York Street/Road and High Street/Hanover Road) overlaps Route 194 and runs through the square for three blocks. It extends west to McSherrystown, PA and east to Spring Grove, PA. Route 216 (Blooming Grove Road) branches southwest off of Route 116 and runs through Codorus State Park.

The bowling scene in the movie Girl, Interrupted was filmed in the basement of the Sheppard Mansion. The mansion and its twin, Myers Mansion, across town both still have bowling alleys in their basements.

All content from Kiddle encyclopedia articles (including the article images and facts) can be freely used under Attribution-ShareAlike license, unless stated otherwise. Cite this article:
Hanover, Pennsylvania Facts for Kids. Kiddle Encyclopedia.