Lewisberry is a borough in York County, Pennsylvania, United States. The population was 362 at the 2010 census.

According to the United States Census Bureau, the borough has a total area of 0.1 square miles (0.26 km2), all of it land.

The lands in and around the borough of Lewisberry were under control of the Susquehannock people until the first Quaker settlements in the 1730s. These settlements were among the first Quaker settlements in America west of the Susquehanna River. Among the group of original titleholders along the small creek that would become known as Bennett Run were Ellis Lewis, Joseph Bennett, John Rankin, John Heald, and John Hall. At this time, the area that would become York County was still almost entirely populated by the Susquehannock Indians. Yet there are few recorded conflicts between these early settlers and the native population. In this area that would later become majority Pennsylvania German, the first and second waves of settlers were almost entirely English speakers and included the Kirks, Rankins, Huttons, Garetsons, Nebingers, Eppleys, Starrs, Fosters, Clines, Stromingers, Moores, Frankelbergers, Suttons, Wickershams, Prowells, Millers, and Hammonds. While most were Quakers, a significant minority were Anglicans. The Quaker meeting house at the intersection of Old Quaker and Lewisberry roads (PA 382) is the original Quaker meeting house in the area. 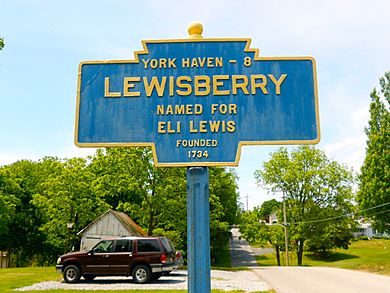 The borough's founder, Eli Lewis, was born nearby in 1750, the son of one of the original settlers, Ellis Lewis. On the eve of the American Revolution, Eli opened a store on the site of the current borough. Lewis and members of other prominent families in the area served in the Pennsylvania militia, and Eli rose to the rank of major. Over the course of the war, the town became known for producing guns, and the Committee of Safety for York County contracted with area gunsmiths to supply the Continental Army; guns made in Lewisberry were in use by the US Army as late as the Siege of Veracruz during the Mexican–American War of 1846. Following the Revolutionary War, Lewis' fortune grew (and he eventually owned 850 acres in the area) and his store was the center of commerce in the Redland Valley. In 1798, Issac Kirk surveyed twelve acres of land and laid out lots for Lewis, who wanted a town to exist on the site. While all of the lots were not immediately sold, many were, and the town began a modest growth. Between 1790 and 1798, Major Lewis had lived in Harrisburg, where he took up printing and published the first Harrisburg newspaper, The Advertiser, which was then sold to John Wyeth, who renamed it The Oracle of Dauphin. While living in Harrisburg, Lewis also published the popular poem, "St. Clair's Defeat," which described the defeat of Arthur St. Clair by the tribes of the Western Confederacy during the Battle of the Wabash.

Lewisberry was not incorporated until 1832, fifty years later, and the first census figures of 1840 show a population of 220. In 1800, Henry Ensminger opened a large tannery just south of town that was later owned and operated by Samuel Grove. More significant for the town's growth was John Herman, who built a large flour mill on the west side of the borough. But the town's most successful operator was Andrew Cline, who ran a large and successful milling business during the second half of the 19th century. The mill and house are still standing just outside the borough beside Silver Lake, which was created to power the mill. One of Lewisberry's most important small industries during the 19th and early 20th centuries was the manufacture of block brimstone matches, and the families of Lyman Lewis, Herman Kirk, Moses Magrew, Rt. Starr, and Lyman Shettle became prosperous through this industry.

In the early 19th century, Joseph Potts manufactured the area's first coffee mills out of his home. This industry grew under his children, and by the middle of the century, Lewisberry was producing large numbers of coffee grinders in a small factory near the Quaker meeting house. In 1835, William Smith started a newspaper in the bustling town. In 1837, Lewisberry native Hervey Hammond began manufacture of the patented Hammond window sash spring, and in 1838, President Martin Van Buren installed Hammond springs in all of the White House's windows.

There were 146 households out of which 43.8% had children under the age of 18 living with them, 53.4% were married couples living together, 9.6% had a female householder with no husband present, and 29.5% were non-families. 26.0% of all households were made up of individuals and 10.3% had someone living alone who was 65 years of age or older. The average household size was 2.64 and the average family size was 3.16.

The intersection of Pennsylvania Route 177 and Pleasant View Road near the borough is said to allow an automobile in neutral to drift uphill. According to legend, this effect is caused by the ghosts of children once killed in a bus accident, who push the car uphill to prevent similar occurrences. However, the phenomenon is caused by a gravity hill optical illusion.

In 2015, a baseball team from Lewisberry participated in the Little League World Series, winning the U.S. Championship and finishing as runner-up to Japan in the world championship game. It was the first appearance for a Pennsylvania team in the final game since 1990.

All content from Kiddle encyclopedia articles (including the article images and facts) can be freely used under Attribution-ShareAlike license, unless stated otherwise. Cite this article:
Lewisberry, Pennsylvania Facts for Kids. Kiddle Encyclopedia.