Seven Valleys is a borough in York County, Pennsylvania, United States. The population was 517 at the 2010 census.

The Seven Valleys basin was settled by forty families of the German Lutheran and Reformed faiths. They originated in the Hunsruck Mountains of the Rhineland Palatinate and arrived in this valley of the Codorus during the early fall of 1738. The lush meadows and gently rolling hills here reminded them of their homeland, even to the presence of seven valleys in the vicinity, and they called it Das Siebenthal, which in German means Seven Valleys.

By 1752 these religious hardworking farmers had organized churches and parochial schools, and holding fast to their German heritage, worshipped God and taught their children in the Pfalzer dialect of the German language for nearly 150 years. 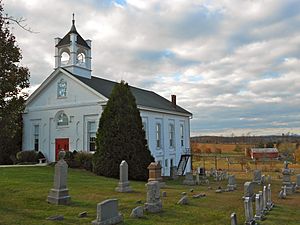 With the coming of the railroad in 1838 and the opportunity to trade commercially with the outside world, the use of the English language gradually crept into the culture and by the end of the Civil War the use of German slowly began fading into the background.

In 1854 iron ore was discovered here and a great wave of prosperity swept the people of the valley : hell-bent-for-leather" on into their golden age of the late 19th and early 20th century.

During the American Civil War, Seven Valleys served as an important stop along the North Central Railroad, and witnessed President Abraham Lincoln's funeral train pass by en route to Harrisburg. 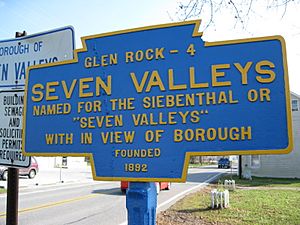 On August 23, 1892 the village of Seven Valleys was incorporated into an independent entity and took its place among the small industrial towns of southern York County.

During its hey-day Seven Valleys was singularly noted for the manufacture of cigars and ice cream. The town boasted three physicians, one undertaker, two school teachers, two general stores, two hotels, two churches, two secret lodges, a baseball team, a feed and flour mill, two ice cream plants, a blacksmith shop, four cigar factories and a sewing factory, as well as numerous small entrepreneurial enterprises. It was a large railroad shipping point for cattle destined for the Baltimore markets and after a bank was founded in 1910 became the financial center for both North Codorus and Springfield Townships.

The Bridge 5+92, Northern Central Railway was added to the National Register of Historic Places in 1995. 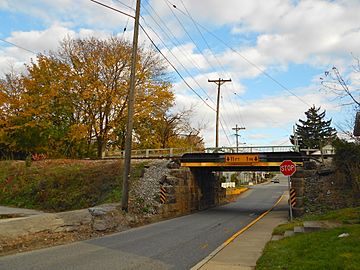 According to the United States Census Bureau, the borough has a total area of 1.1 square miles (2.8 km2), all of it land. 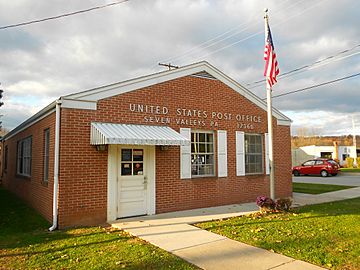 There were 188 households, out of which 32.4% had children under the age of 18 living with them, 58.0% were married couples living together, 9.6% had a female householder with no husband present, and 28.2% were non-families. 21.8% of all households were made up of individuals, and 11.2% had someone living alone who was 65 years of age or older. The average household size was 2.62 and the average family size was 3.02.

All content from Kiddle encyclopedia articles (including the article images and facts) can be freely used under Attribution-ShareAlike license, unless stated otherwise. Cite this article:
Seven Valleys, Pennsylvania Facts for Kids. Kiddle Encyclopedia.