East York is a census-designated place (CDP) in York County, Pennsylvania, United States. The population was 8,777 at the 2010 census.

According to the United States Census Bureau, the CDP has a total area of 2.9 square miles (7.5 km2), all of it land.

The suburb of East York was developed in 1903 with the foresight that industrial expansion would attract a great increase in population. John H. Longstreet’s vision foresaw the pathway of expansion.

Known to many as the Keesey Tract, the East York area was listed as "fronting, for two-thirds of a mile, on both sides of Market Street, York’s main thoroughfare, and part of the Great Lincoln Highway." Only an eleven-minute ride from Center Square in York, it featured high ground with perfect natural drainage, cement walks and curbs, macadamized streets, pure filtered water, electric lights, and a complete sewer system.

The East York area offered its members all the privileges of an up-to-date club. Any resident could be member and enjoy its privileges, including dining services, games, lawn tennis, and the entire social advantages attendant thereto. The club’s privileges were also open to members’ families.

The East York Historic District is listed on the National Register of Historic Places. 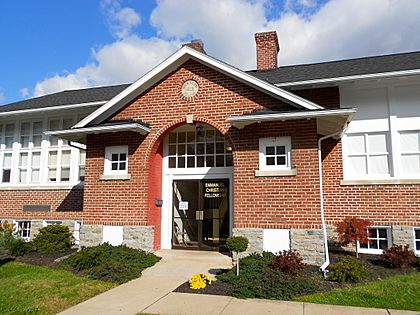 In 1912, the John S. Hiestand School was built in the area on land donated by John S. Longstreet. This school was built in what was then the Independent School District. A graded school, managed by a progressive Board of Directors, its students were taught by competent teachers in all grades from first to eighth and prepared for entrance into York High School.

There, tuition was paid for by the Independent School District under an agreement with the city school board.

The first consideration in designing and erecting the building was the children’s welfare. The building was located in the center of ample playgrounds, had two classrooms, boys’ and girls’ cloakrooms, functional toilets, and large basement playrooms for use in bad weather. The school, where all students and residents could obtain free use of well-selected books, also maintained a public library.

The original two classrooms were doubled to four in 1927 and there were six rooms by 1937. The Hiestand School was closed in June 1978 for financial reasons and due to declining enrollment, and has been used subsequently by various community organizations. 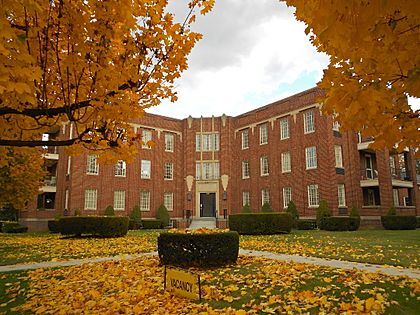 There were 3,726 households out of which 23.8% had children under the age of 18 living with them, 56.4% were married couples living together, 7.1% had a female householder with no husband present, and 34.1% were non-families. 29.6% of all households were made up of individuals and 15.5% had someone living alone who was 65 years of age or older. The average household size was 2.24 and the average family size was 2.77.

All content from Kiddle encyclopedia articles (including the article images and facts) can be freely used under Attribution-ShareAlike license, unless stated otherwise. Cite this article:
East York, Pennsylvania Facts for Kids. Kiddle Encyclopedia.