Delta is a borough in York County, Pennsylvania, United States, and one of the southernmost communities in Pennsylvania. The population was 728 at the 2010 census. It is served by the South Eastern School District which provides a public education.

According to the United States Census Bureau, the borough has a total area of 0.3 square miles (0.78 km2), all of it land.

There were 285 households out of which 37.5% had children under the age of 18 living with them, 50.5% were married couples living together, 10.5% had a female householder with no husband present, and 31.9% were non-families. 25.6% of all households were made up of individuals and 10.9% had someone living alone who was 65 years of age or older. The average household size was 2.60 and the average family size was 3.12.

Delta is at the heart of the Peach Bottom Slate Region. Slate quarries opened in Delta in the 1840s, as quarrymen arrived from Wales. At the Crystal Palace Exposition of 1850, Peach Bottom slate was judged the finest in the world. Most of Delta's houses still have slate roofs, and remnants of the original blue-black slate sidewalks still exist throughout the borough. 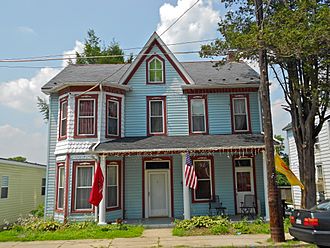 The Peach Bottom Railway entered Delta in 1876, and shipped slate along its line to Red Lion and York, Pennsylvania. From the south, the Maryland Central Railroad reached Delta in 1883 and began operating trains from Delta to Bel Air, Maryland and Baltimore in 1884. Both lines were later succeeded by the Maryland and Pennsylvania Railroad, which operated until 1978. The slate quarry was a major freight customer until 1971.

The Rehoboth Welsh Chapel in Delta is a non-denominational Christian church that holds services in Welsh and English. Its Welsh choir has won a prize at the highly competitive National Eisteddfod of Wales and performed at the wedding of Michael Douglas and Catherine Zeta Jones.

The Delta Historic District was listed on the National Register of Historic Places in 1983.

All content from Kiddle encyclopedia articles (including the article images and facts) can be freely used under Attribution-ShareAlike license, unless stated otherwise. Cite this article:
Delta, Pennsylvania Facts for Kids. Kiddle Encyclopedia.