New Freedom is a borough in York County, Pennsylvania. As of the 2010 census, the borough had a population of 4,464. Once an industrial/railroad town, the community has evolved into a mostly residential town.

New Freedom Borough is located in the southern portion of York County, Pennsylvania. The borough borders the Mason-Dixon line and was incorporated in 1873. Originally named “Freedom” for the Free family, there was another town already in existence with that name, so New Freedom was chosen as the official name.

The Northern Central Railway was a primary factor for early growth of the town. The rail service established a vital means of commerce and transportation until Hurricane Agnes in 1972 destroyed much of the rail line and bridges in York County.

Located 30 miles north of Baltimore, Maryland and 38 miles south of Harrisburg, Pennsylvania the town is changing from an area of commerce and minor industry to a commuter community.

According to the United States Census Bureau, the borough has a total area of 2.0 square miles (5.2 km2), all land.

There were 1,296 households, out of which 38.4% had children under the age of 18 living with them, 70.1% were married couples living together, 7.1% had a female householder with no spouse present, and 20.4% were non-families. 16.9% of all households were made up of individuals, and 7.3% had someone living alone who was 65 years of age or older. The average household size was 2.70 and the average family size was 3.04. 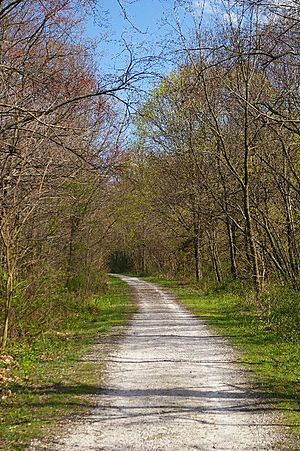 Section of the York County Heritage Rail Trail that runs through New Freedom.

The York County Heritage Rail Trail cuts through the center of New Freedom. The trail, which was established in 1992, runs from just south of New Freedom 21 miles (34 km) north into the city of York. The trail also connects to 20-mile-long (32 km) Northern Central Railroad Trail in Maryland, heading south from the Mason-Dixon line.

Currently, a new community park is being built in the middle of town, which will be known as the "Freedom Greene." 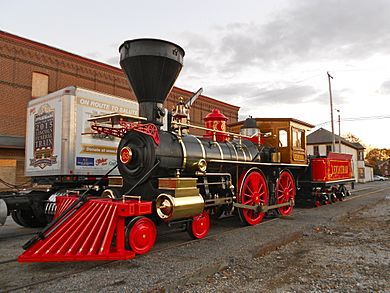 The Leviathan, a replica of Abraham Lincoln's funeral train, in New Freedom

New Freedom is home to the D. Landreth Seed Company, which is the oldest seed company in America.

All content from Kiddle encyclopedia articles (including the article images and facts) can be freely used under Attribution-ShareAlike license, unless stated otherwise. Cite this article:
New Freedom, Pennsylvania Facts for Kids. Kiddle Encyclopedia.