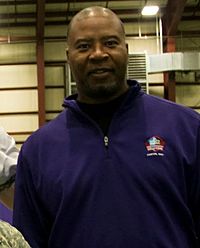 Christopher John Doleman (October 16, 1961 – January 28, 2020) was an American football defensive end. He was born in Indianapolis, Indiana. He played in the National Football League (NFL) for the Minnesota Vikings, Atlanta Falcons, and San Francisco 49ers from 1985 to 1999. He was an 8-time Pro Bowl selection and a 3-time First-team All-Pro, recording 150.5 career sacks.

He was elected to the Pro Football Hall of Fame in 2012.

In January 2018, Doleman was diagnosed with glioblastoma, a rare terminal form of brain cancer. He died two years later from the disease in Duluth, Georgia on January 28, 2020 at the age of 58.

All content from Kiddle encyclopedia articles (including the article images and facts) can be freely used under Attribution-ShareAlike license, unless stated otherwise. Cite this article:
Chris Doleman Facts for Kids. Kiddle Encyclopedia.