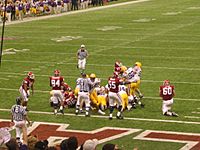 The Sugar Bowl is an annual American college football bowl game played in New Orleans, Louisiana. It has been played annually since January 1, 1935, and celebrated its 75th anniversary on January 2, 2009. The Sugar Bowl, along with the Orange Bowl and Sun Bowl, are the second-oldest bowl games in the country, behind the Rose Bowl Game.

The Sugar Bowl was originally played at Tulane Stadium before moving to the Superdome in 1975. When the Superdome and the rest of the city suffered damage due to both the winds from and the flooding in the aftermath of Hurricane Katrina in 2005, the Sugar Bowl was temporarily moved to the Georgia Dome in Atlanta in 2006. Since 2007, the game has been sponsored by Allstate and officially known as the Allstate Sugar Bowl. Previous sponsors include Nokia (1996–2006) and USF&G Financial Services (1988–1995).

The Sugar Bowl has had a longstanding—albeit not exclusive—relationship with the Southeastern Conference (SEC) (which once had a member institution based in New Orleans, Tulane University; another Louisiana school, Louisiana State University (LSU) in Baton Rouge, is still in the SEC today). Indeed, the Sugar Bowl did not feature an SEC team only four times in its first 60 editions, and an SEC team played in the game in every year but one from 1950 to 1995. The SEC's opponent varied from year to year, but prior to the advent of the Bowl Championship Series, it was often the runner-up of the Big Eight, SWC, or a major independent.

The Sugar Bowl-SEC relationship has been altered over the past twenty years due to conference realignments and the emergence of a series of coalitions and alliances intending to produce an undisputed national champion in college football, but the ties between the Sugar Bowl and the SEC have persisted and have recently been strengthened. Since 2015, the Sugar Bowl, along with the Rose, Orange, Cotton, Peach, and Fiesta bowls, is one of the "New Year's Six" bowls in rotation for the College Football Playoff. It hosted a playoff semifinal following the 2014 and 2017 seasons, and will next host one following the 2020 season. In other years, it will feature the best available teams from SEC and the Big 12 conferences, an arrangement nearly identical with the relationship between the Rose Bowl and the champions of the Big Ten and Pac-12.

All content from Kiddle encyclopedia articles (including the article images and facts) can be freely used under Attribution-ShareAlike license, unless stated otherwise. Cite this article:
Sugar Bowl Facts for Kids. Kiddle Encyclopedia.