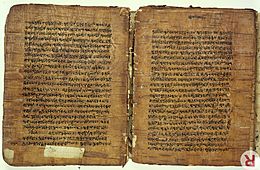 Pāṇini (पाणिनि) (pronounced [paːɳɪnɪ], fl. 4th century BCE; older research mentions "6th to 5th century BCE") was an ancient Sanskrit philologist, grammarian, and a revered scholar in ancient India. Considered the father of linguistics, Pāṇini likely lived in the northwest Indian subcontinent during the Mahajanapada era. He is said to have been born in Shalatula of ancient Gandhara, which likely was near modern Lahor, a small town at the junction of the Indus and Kabul rivers, which falls in the Swabi District of modern Khyber Pakhtunkhwa, Pakistan.

Pāṇini is known for his text Ashtadhyayi, a sutra-style treatise on Sanskrit grammar, 3,959 "verses" or rules on linguistics, syntax and semantics in "eight chapters" which is the foundational text of the Vyākaraṇa branch of the Vedanga, the auxiliary scholarly disciplines of the Vedic period. His aphoristic text attracted numerous bhashya (commentaries), of which Patanjali's Mahābhāṣya is the most famous in Hindu traditions. His formalization of language seems to have been influential in the formalization of dance and music by Bharata Muni. His ideas influenced and attracted commentaries from scholars of other Indian religions such as Buddhism.

Pāṇini's analysis of noun compounds still forms the basis of modern linguistic theories of compounding in Indian languages. Pāṇini's comprehensive and scientific theory of grammar is conventionally taken to mark the start of Classical Sanskrit. His systematic treatise inspired and made Sanskrit the preeminent Indian language of learning and literature for two millennia.

Pāṇini's theory of morphological analysis was more advanced than any equivalent Western theory before the 20th century. His treatise is generative and descriptive, uses metalanguage and meta-rules, and has been compared to the Turing machine wherein the logical structure of any computing device has been reduced to its essentials using an idealized mathematical model. Template:Hinduism

The name Pāṇini is a patronymic meaning descendant of Paṇina. His full name was "Dakṣiputra Pāṇini" according to verses 1.75.13 and 3.251.12 of Patanjali's Mahābhāṣya, with the first part suggesting his mother's name was Dakṣi.

All content from Kiddle encyclopedia articles (including the article images and facts) can be freely used under Attribution-ShareAlike license, unless stated otherwise. Cite this article:
Pāṇini Facts for Kids. Kiddle Encyclopedia.