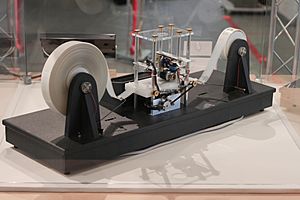 Model of a Turing machine

A Turing machine consists of the following components (simplified):

Also, a working-alphabet (set of characters) has to be defined.

When a Turing machine is started, a word (out of the working-alphabet) must be present on the infinite tape of the machine. The read/write-device on the first character now reads the first character and depending on the current state of Turing machine the read/write-device overwrites the character with a new one or moves one cell to the left or to the right. Furthermore, the current state of the machine can be switched.

For decidability theory a Turing machine is said to decide a language if it is always able to determine whether a given word is contained in a certain language or not. Therefore, the machine usually has two special states marked as Accept and Reject. After a while one of the two states will be reached (depending on the input word) and the machine is halted. If only one of the two states will ever be reached, the Turing machine is said to semi-decide a language.

If a Turing machine is used for the computation of functions it only has one end state. When the machine comes to that state it is halted and the result of the function (depending on the input) can be found on the tape.

Turing machines were not invented to be built in reality, but they are very important for theoretical computer science as they are one of the simplest models for computers. The Church-Turing thesis states that all computers are only as powerful as Turing machines. This can be used to prove if a problem is solvable by a computer or not.

All content from Kiddle encyclopedia articles (including the article images and facts) can be freely used under Attribution-ShareAlike license, unless stated otherwise. Cite this article:
Turing machine Facts for Kids. Kiddle Encyclopedia.