Sutz-Lattrigen is a municipality in the administrative district of Biel/Bienne in the canton of Berne in Switzerland. 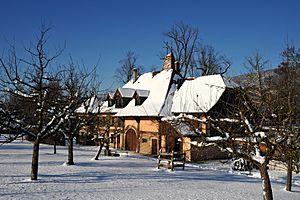 The Neolithic / Bronze Age lake-side settlement of Sutz-Lattrigen–Rütte and the Von Rütte-Gut are listed as Swiss heritage site of national significance. 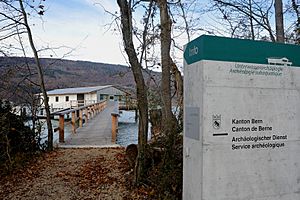 Canton of Bern archeological office on the lake shore, near the prehistoric sites

It is home to the Sutz-Lattrigen–Rütte prehistoric pile-dwelling (or stilt house) settlement that is part of the Prehistoric Pile dwellings around the Alps UNESCO World Heritage Site.

The Sutz-Lattrigen–Rütte, named after the nearby von Rütte estate, was occupied during the final neolithic period and contains the remains of several settlements and artifacts from the rise of the Corded Ware culture. There are only a few Corded Ware culture sites in Europe and all the known settlements are in Switzerland. Additionally, the only western Swiss lakeside bell beaker pottery was found at the site.

The first village at the site has been dendrochronologically dated to 2763-2746 BC, but very little is known about it. The next settlement of 12 houses, was dated to 2736-2688 BC and 2627 BC. This settlement was destroyed in a fire in 2704 BC and at least 12 new houses were built immediately there after.

All content from Kiddle encyclopedia articles (including the article images and facts) can be freely used under Attribution-ShareAlike license, unless stated otherwise. Cite this article:
Sutz-Lattrigen Facts for Kids. Kiddle Encyclopedia.