Kids Encyclopedia Facts
Not to be confused with freeware, which means software that is free of charge. 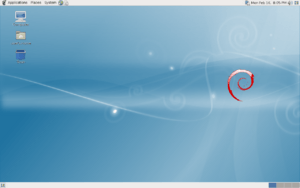 Free software is software (computer program) that anyone may run, share and change, at any time, for any reason. In this case, "free" means "freedom-respecting" (we say "free as in freedom"). The opposite of free software is proprietary software.

In 1984, Richard Stallman started the free software movement when he began the GNU project. Examples of free software are Linux (the kernel), Blender, OpenBSD, Inkscape and others. Wikipedia also uses free software.

People who use the name “free software” think that computers should be more ethical and should try to help people who use computers. They think every human should have four basic rights for their programs. These are the rights to:

Free software movement also says that all software should be free (as in freedom). It is because even a very small program that is proprietary can be very dangerous (it can for example spy on the user).

People who use the name “open source” more like the free software rules too, but they aren't so strict and don't say that everything should be open source. They say the rules are good because they help companies make business.

An author who wants to make his computer program free must allow other people to use it for anything (which doesn't break the law), study it, change it and share it without limits. The author does this by using a free license.

The author must not prohibit even selling his program by others or using his program for dangerous things or using it by people he doesn't like. This is not because the author supports bad things, but because he thinks that limiting user's rights is dangerous for them.

The word “free” in “free software” means freedom, not price. People are allowed to sell Free software, but the person who buys the software can change it, give it away or sell it too.

The words “free software” are sometimes used in English to just mean software that can be downloaded without paying money, which is confusing. Sometimes this software lets people make their own copies for other people, however it may not let people do all the things that they can do with real Free software, such as change it or sell it. In this case “free” means “free of charge”. To make the difference more clear, software that does not cost money should be called freeware; it is almost always proprietary software.

All content from Kiddle encyclopedia articles (including the article images and facts) can be freely used under Attribution-ShareAlike license, unless stated otherwise. Cite this article:
Free software Facts for Kids. Kiddle Encyclopedia.